Together We’re Strong: A Plan 25 Years in the Making

Together we’re strong isn’t just the title to our series of exposes on our office culture. It’s a mission statement. We believe that teamwork isn’t just a means to an end; it’s at the very heart of engineering. We thought we’d save our Paducah office for last, since it’s the first, and turns 25 years old this year.

It only made sense to sit down and talk to the founders, Mark Workman, Executive Vice-President/Owner, and Chris Farmer, President/ Principal Engineer/Owner. We asked them about their past, the present, and what the future holds. Mostly, we wanted to know how they did it. They were eager to share the original plan.

Step 1: Make Your Obsession Your Business

“I can honestly say we had no idea what we were doing and what to expect for the future. We were literally working and hoping to get paid each week. Most people who know me will tell you that I have always been hyper-focused on work, and I work a lot of hours. I really have no hobbies except for work.” answered Mark. Chris’s answer was eerily similar.

“Honestly, in those first few months, we were so focused on where our next meal was coming from, we did not have much time to look up, let alone to the future. But slowly over the weeks, we began to look out to see the path ahead and think about the future of the business. Both Mark and I knew we wanted a business that was different than any other place that we had worked previously in our separate careers. We had seen the models of the bigger and older firms and thought we could do it differently, hopefully better.”

Okay, so maybe BFW/Marcum started more on a hope, a dream, and some determination. It was just two people that wanted to start on their own and hoped that they’d do things a little different along the way. However, Chris made sure to point out that things changed as soon as they found their footing.

“We learned quickly that you cannot dream entirely of the future without taking care of business today. It may surprise some, but not all the changes you want to make can occur rapidly. You may have a lack of resources (i.e., manpower or money), not the right timing, or need to gather additional information before changes can be made.

In our early years, we were in a few different physical locations. However, we knew that we wanted to continue to grow in services and personnel which prompted our move to our current home office location in Paducah, Kentucky. The property and building have allowed us space to physically grow over the years. As our other office locations have come about, we continue to look ahead to see how we can balance the opportunities for growth with our resources and ultimately how we can best serve our clients.”

With Paducah, all those 25 years ago, things began to get serious.

We asked both Mark and Chris to describe to us what they might say to the bright-faced, young engineers that started BFW/Marcum all those years ago. Mark was first to answer.

“I am not sure I would say anything; I’d let him sweat it out just like I did. We had our missteps and bad decisions but, for every bad situation, there was a lesson learned (albeit sometimes painfully) that led to better decisions in the future.

However, I would tell him to never give up, and just because the answer is no today, doesn’t mean it will be tomorrow.  There is never a bridge that is too far; you just have to determine a strategy and path to get to and cross the bridge.”

Chris would love the opportunity to tell his younger self that he was on the right track, even when the work was hard.

“I have thought about this question before. I believe I would say to my younger self, ‘Get some sleep, it will be OK!’  I believe starting a business has several different sides. I believe it takes a belief in yourself and partner(s), your product/service, a higher than typical tolerance for risk, and a slight suspension of reality. First, you must believe, more than anything, you want to start this venture and you trust those you are in business with. But most of all you must believe in what you are doing and the services you are providing have value. How are you going to separate yourself from the crowd? It ultimately comes back to your belief: if you don’t believe that what your doing is worth it…nobody else will either.

Second, there is a lot of risk in starting a business. There are risks you can measure or put a number on. But there are many, many more that you cannot. Some risks you didn’t even realize were there until you look back several years later. But as the saying goes, there is no reward without risk.”

To put it simply, obstacles and risk are the crucibles that facilitate great work and find you the most meaningful success. Don’t try and avoid the sting of failure or you’ll rob yourself the pleasure of truly appreciating success.

Step 3: Find What Works & Make it Part of the Culture

So, you have the space to work in, and you’re taking each obstacle as you come and learning along the way. How do you turn these experiences into something that fortifies your business? Mark explains that process.

“Our culture is something that is fostered over time and led by example. However, each office has its sub-culture. The overall culture has to align with the company mission and values, which we’ve developed through the years to reflect the kind of business we want to run. It is important to get every team member on the page and embrace transparency.

As leaders, it is important to create an environment of collaboration and simply say thank you for other’s efforts and/or ideas.  If we have learned one thing in 2020/2021 alone, it is that we must be flexible and understand the work-life balance and its importance. We have to celebrate our team members’ accomplishments and achievements and seek their feedback because their input is vital to the company’s success.

Finally, we have to help reduce stress in some way and that is done through our wellness program that also has a financial wellness component.  For office culture to be positive, it requires work and dedication every single day.”

Step 4: Have a Heart

What’s at the heart of BFW/Marcum, specifically the Paducah office? We asked Chris and Mark.

Chris believes the heart of the company lies in Paducah, yet, all of the offices are part of the circulatory system, and just as pivotal.

“I believe that most clients recognize the Paducah office as the heart of the BFW organization. A place where they can come in, lay their engineering problem on the table, and walk out knowing that they have been heard and that someone is in their corner finding solutions to their issues. I believe that they trust us to tell them the truth of the situation but that we don’t just stop and leave them there. We partner with them to help move them forward to find solid, cost-effective solutions. This certainly can be said of every BFW location, but I believe that is especially true of our main office.

The Paducah office is also known for some of its departments that are currently only found at this location namely our testing and inspections, environmental and geotechnical departments. I believe these departments (just as others) have fostered a clientele based on relationship and trust. On a lighter note, I believe most clients know that this is the lair of our resident superhero Mr. Workman.”

Mark may call Paducah home, but he’s quick to explain that the main office serves the broader community of Kentucky as well as the broader culture of BFW/Marcum.

“Paducah is known as the baseline for everything we’re known for: strong positive relationships, exceeding our clients’ and co-workers’ expectations, and a deep sense of community involvement.” What we do in Paducah reflects what we do all across the region. 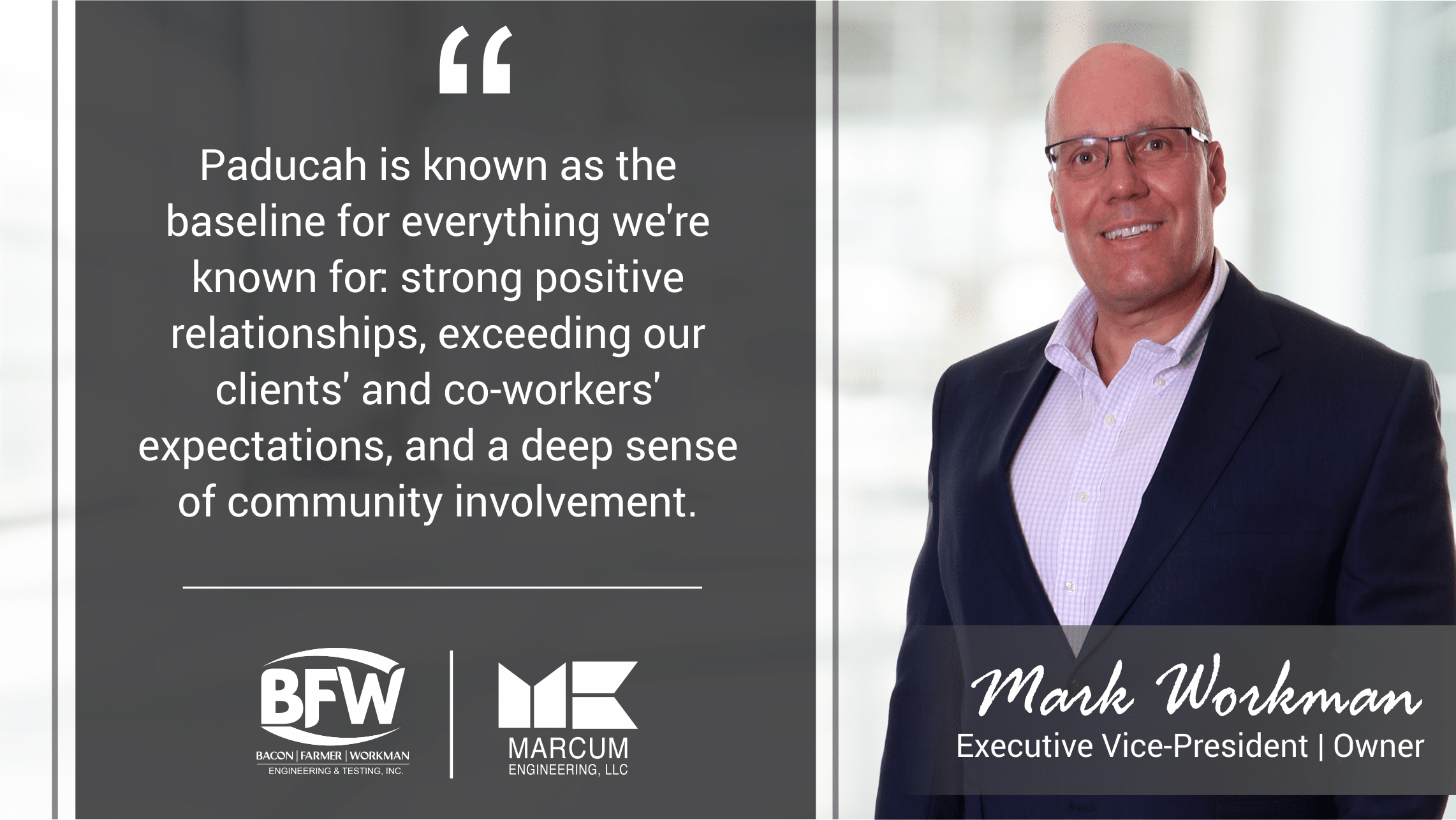 Pride in one’s work is essential to success. With pride comes accountability, with accountability, comes a standard of quality and hard work. One sets the other up for success, and so on. We asked Chris and Mark what they’re most proud of.

Mark’s pride is for the people he works with. “Wow, there are so many things that come to mind when I think about what I’m most proud of but without a doubt, I am proud of the accomplishments of my co-workers’ growth and simply being a small part of an outstanding group of professionals. I could never imagine leading a better group of people than the team at BFW and Marcum Engineering.”

Chris is similarly prideful of the colleagues he gets to work with every day on the job. “I am proud of many things as it relates to BFW and Marcum. God has blessed both of these endeavors to an extent that truly is hard for me to believe. I am proud of the people who call BFW/Marcum their work home. To see the hard work and dedication of everyone, while also seeing a lot of smiles and hearing a lot of laughter, makes me proud to be a part of this organization. I am proud of the projects that we have been privileged to be a part of and of the final products whether they include a building, bridge, system, or process.

I am proud of the consistent growth that we as a company have been able to maintain. Of the new technology and methods that we have incorporated into our workflows over the years. I am proud of our client satisfaction with a job well done and to know that they see BFW / Marcum as an asset in their corner. Of the relationships that have been developed over the years within the company as well as with our clients. But I guess the thing I am proudest of is that God has allowed me (like a parent) the opportunity to see the birth of this company, to experience the growing pains and the joys along the way, and to watch it grow into something that is so much more wonderful and exciting than two young guys could have imagined.”

We can’t believe it’s been 25 years. Time flies when you’re having fun. Chris and Mark, like parents, can appreciate how quickly and slowly it’s all gone by. For fun, we asked them what they’d say if they could speak to the BFW/Marcum 25 years into the future.

Mark would remind them to remain humble even in the face of success. “Continue to follow our values of exceeding client expectations while enhancing our communities and enriching employees’ lives and stay on point with the mission. It is important to stay humble and put the clients and company above self.”

Chris wants his future engineers to keep their eyes on the horizon, just like he is. “Building a team can sometimes be very easy BUT keeping a team together long term is more of a challenge. Be prepared to keep improving the work experience for the employees but don’t throw the baby out with the bathwater. If something needs to change to improve then do it but don’t change just for change’s sake. But most of all: Never stop pursuing excellence and becoming better at your profession. Never stop using your skills to solve problems for clients and the ultimate good for society. Believe in yourself but never tell yourself how good you are. Let the clients do that for you.”

Our clients have given us two and a half decades of business, so if that doesn’t say something, we don’t know what would. Here’s to another 25.