In 2017, just 21.7% of undergraduate engineering students were women! It’s no secret to even those outside of our industry that engineering has, for as long as it existed, been considered a man’s world. Thankfully, we understand today that that designation is arbitrary. However, there is much more progress to be had before women can safely say they’re a cohesive part of the industry. At BFW/Marcum, we’re an employee-first firm, and will always have a stake in that progress.

We deliberated over how to highlight our female engineers. We won’t mince our words—getting a foothold in any branch of engineering as a female isn’t easy. It’s often downright frustrating. That’s why we asked our female engineers two important questions, and let their unfettered words represent their journey in this industry. The first question was; what is a memorable challenge you’ve faced as an engineer? We weren’t looking for a feel-good story of perseverance (though, our employees are all here because they’re a tenacious crew) but instead a transparent look into the hardships of our industry.

Lastly, we asked for a story of success. We’ve learned that, as hard as something is, there’s always something to look forward to or look back on through the hard work.

“One of the biggest challenges that I faced in my early years working as a female engineer was finding ways to gain respect and acceptance from my older male colleagues. In the late 80s, there were very few women in the Civil Engineering industry. It was difficult being the only woman in the room. I had to be courageous and muster enough confidence to be “okay” in that role. Many times during my career I have been the lone woman in a meeting or on a committee.

Notably, when I was hired into one of my early positions, many older seasoned male engineering professionals were working in the division. Looking back, I was very lucky to be hired there, but at the time, I did not believe it was good luck. Many of the men did not support women working in the engineering field. Some men told me openly that I should be at home raising children or complaining that I was taking a man’s job. Because I was passionate and willing to work hard, many of the engineers began to give me a chance to perform multiple project duties and opportunities to be a member of many statewide committees that helped to expand my skills and knowledge of the industry. 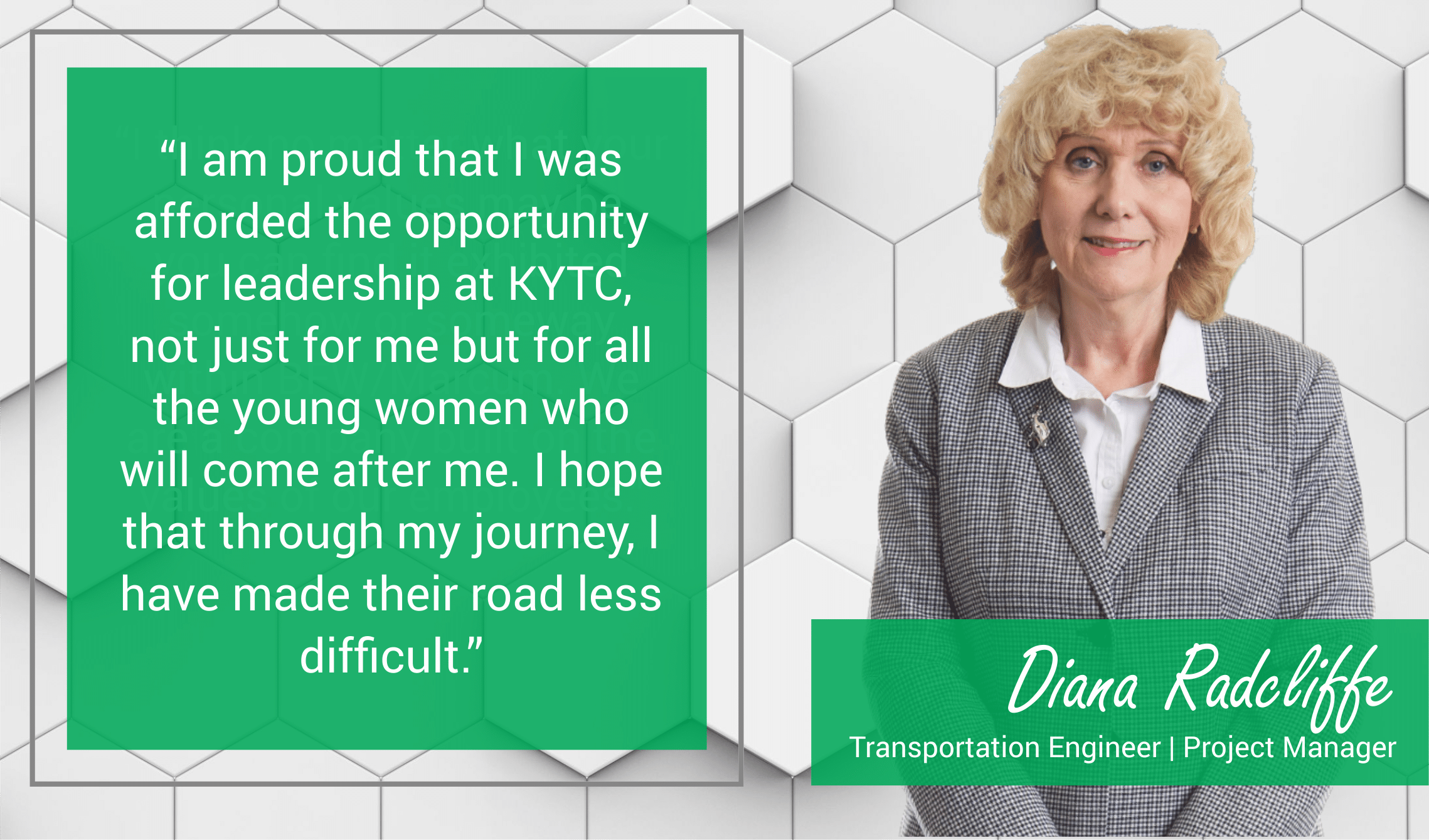 Over time, they grew to respect me through my work ethic and my willingness to go above and beyond on all projects. As I showed interest in learning about the engineering of projects, the men began to understand that I respected and valued their many years of expertise. I compare my career choice to the poem “The Road Not Taken” by Robert Frost, “I have always taken the road less traveled by, and that has made all the difference”.

However, one of my most important successes that occurred was my promotion to Director of Construction Procurement at KYTC. I was humbled that management noticed and appreciated my dedication, perseverance, hard work, and willingness to go above and beyond in my duties for over 20+ years. I am proud that I was afforded that opportunity not just for me but for all the young women who will come after me. I hope that through my journey, I have made their road less difficult. Some people might say I got lucky, to them, I have another quote up my sleeve, one from a Roman philosopher, “Luck is what happens when preparation meets opportunity.” You could call it luck; I’ll call it everything but.

“I’ll be honest—I entered college without really knowing what I wanted to do. I knew I was good at math and science. I stuck to Murray State University for one year until I realized that engineering was my calling. From there, I transferred over to Paducah Community College (PCC) to take care of some of the lower-level engineering classes.

PCC went exceedingly well. It was after finishing the lower-level engineering courses that I transferred to the University of Kentucky and entered the College of Engineering, particularly the “upper-level engineering division.” Let me say just one thing; electrical engineering and the classes that encompass that field are tough. They’re more than tough. Yet, I made it through. 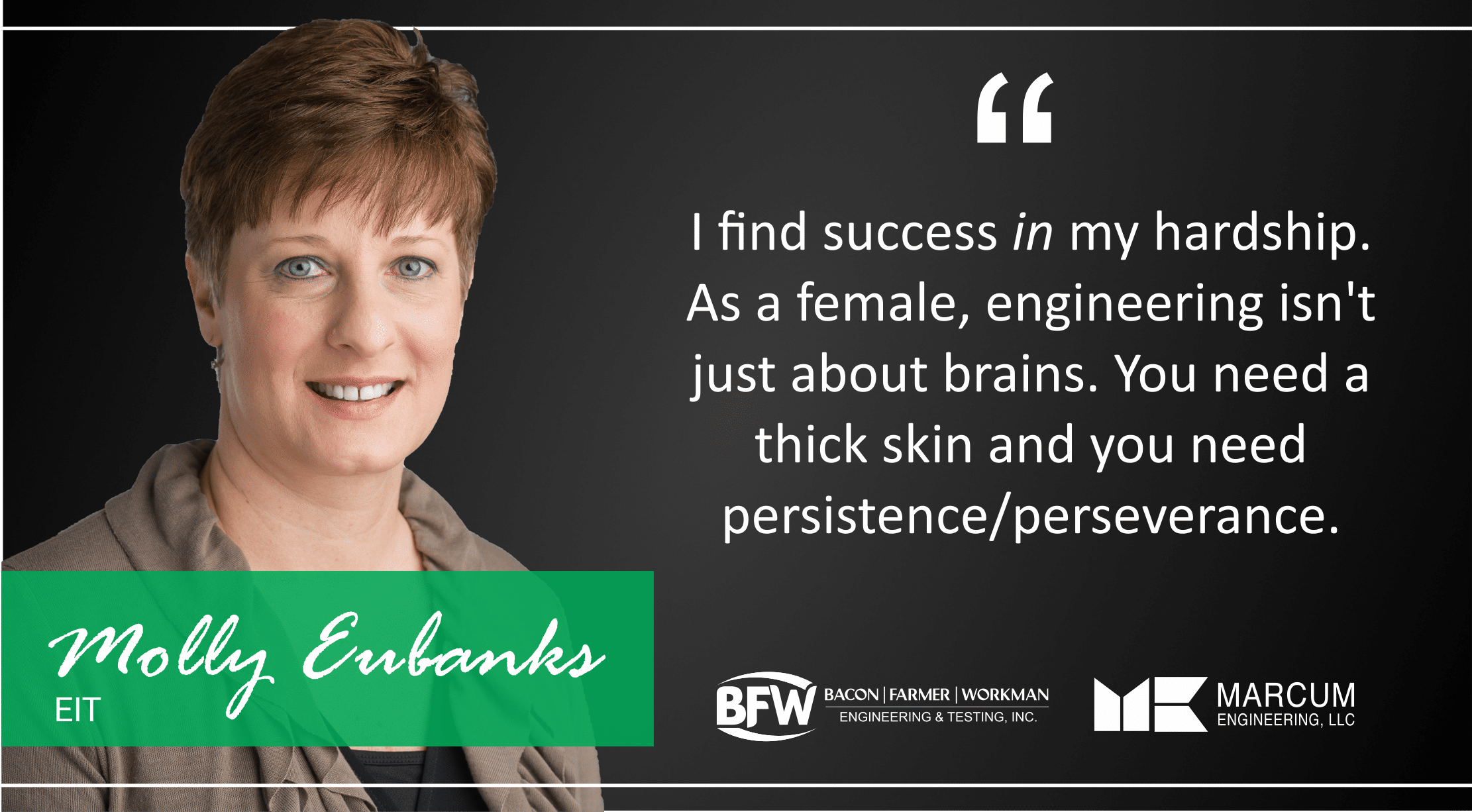 However, it was when taking these classes that I realized I was pursuing a greatly male-dominated career. It was disheartening to be both challenged by the material and by my fellow student body. My time at the University of Kentucky didn’t just teach me engineering theory and skills but how to forge my own path with confidence—I didn’t really have anyone to show me the ropes.

Let me put this industry in perspective a little. Of my graduating class at UK in 1994, there were only 8 females out of approximately 250 engineering students.

For that very reason, I find success in my hardship. As a female, engineering isn’t just about brains. You need a thick skin and you need persistence/perseverance. I was only 3.2% of my graduating class yet now my degree has turned into a career that lets me provide for my family. I call that success against all odds.”