Tales from a Geophysicist

If you follow any of us on social media, then you might have come across a few posts by one of our teammates Boston Fodor. He’s usually standing out in a field in the middle of nowhere, having the time of his life. You might be (rightfully) thinking, this guy’s an engineer?

He’s worse than that. He’s a geophysicist. He studies rocks, gravity, magnetic fields, and everything else you’d picture some long-bearded Greek philosopher studying in his laboratory. Sure, maybe we sound a little salty. After all, a lot of our work puts us in front of a computer screen. To be perfectly honest, modern engineering is a predominately digital trade. Boston, however, is a little different from the rest of us; he spends a lot of his time outside.

What is a Geophysicist, Anyway?

We asked Boston to explain his elusive profession to us.

“When in the field, geophysicists are usually collecting data. During electrical resistivity and seismic refraction surveys most field time (80%) is spent setting up the equipment. This can be everything from clearing paths in the woods, hooking up electrical components, lugging around equipment, laying out long survey lines, or troubleshooting finicky electronics and software. Then 20% is the actual data collection.

The reverse can be true for ‘utility locates’ (finding things like underground electrical and gas lines), electromagnetic and ground-penetrating radar (GPR) surveying where we spend little time setting up and the rest of our field time collecting data.  In these cases, collecting data translates to getting your steps in – and I mean it when I say we get them; upwards of 9 miles per day.”

So, it seems Boston does do something when he disappears into the wild on a job. We asked him to share some of his most interesting stories from the field.

“One of the benefits of remote field work is the extremely peaceful, solitary moments. When these happen, I like to take a picture and send them to my friends with the caption ‘Today’s Office.’ I remember one recently that involved some resistivity work for a dam. The job site was located deep in the Ozarks. The only sounds were from the field crew and nature. The view was fantastic. 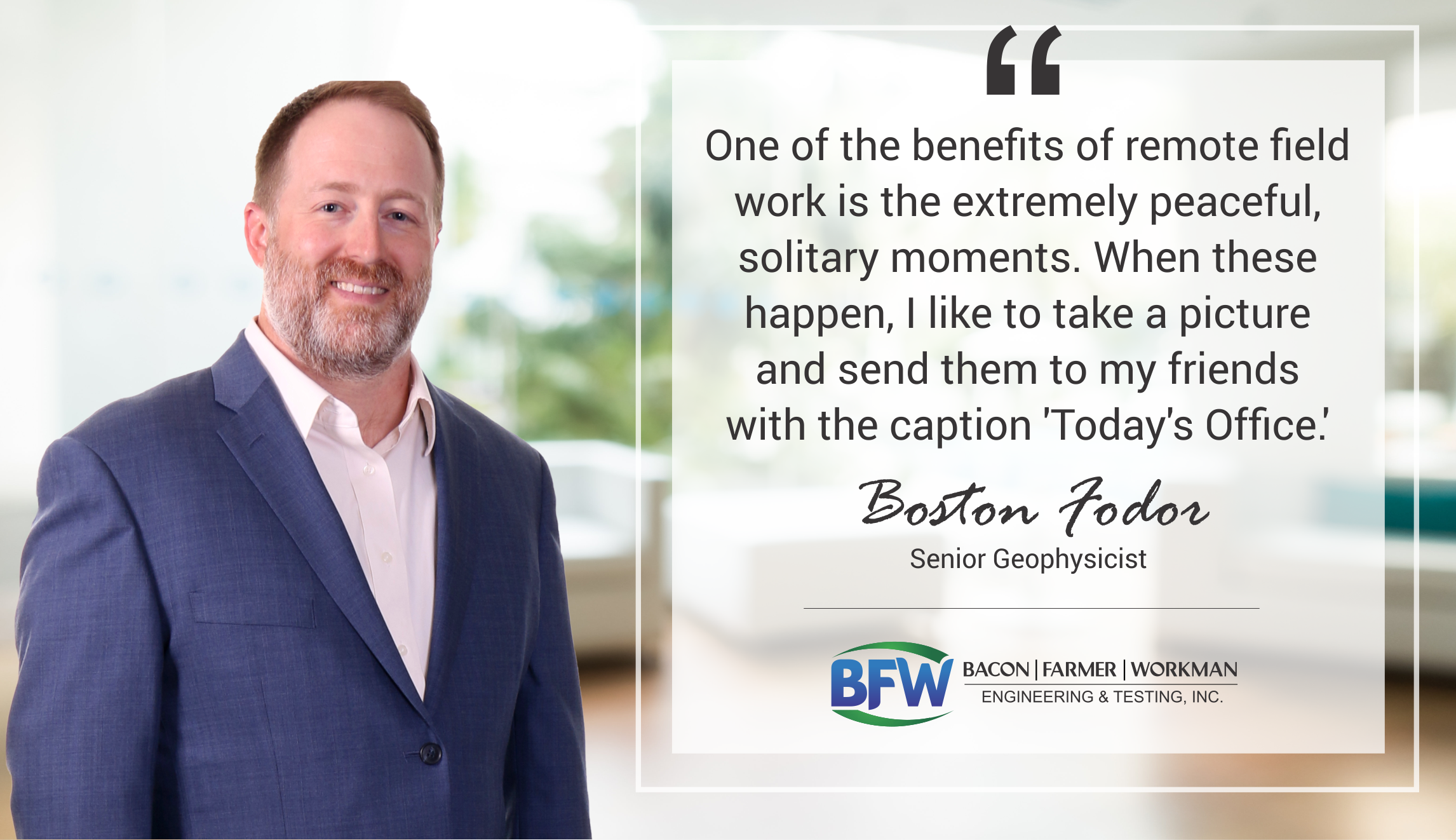 Scenic views often lend to some of the most memorable projects. I recall working along the bluffs of the Mississippi River. We worked hard, but during lunch we’d find a shady spot and watch the river traffic. Beats the heck out of your office break room. Apologies to those of you reading this while eating your sandwich over your keyboards right now!”

…Or by Its Latin Name, “Nope Rope”

Aside from the nature you take home with you (think ticks), I have luckily had few issues with wildlife or contact with apex predators, yet I have one story of a close call with the wild.

Years ago, a coworker and I were packing out for the day. We were just getting started and had about 3-4 trips worth of equipment to haul up to the top of a levee where our truck was parked. We always take the heaviest equipment first – this time it was the deep-cycle marine batteries that we use to power our equipment.

With my arms weighed down I began the hike up the overgrown levee; my coworker equally weighed down, was just a few steps behind me. About four or five steps up, I noticed that I am about to put my foot right on a nope rope*.”

*Editor’s note: we wanted to interrupt here and explain Boston’s overly scientific wording of the animal in question. Boston is referring to the reptile known as the “snake.”

It sported the perfect shades of gray and brown that blended in with the levee’s grassy cover. It’s body was tightly coiled, head raised about six inches from the coil, and mouth hissing.

My reaction was to sling a 30-pound deep-cycle marine battery at it. I’m not David and I suppose the snake was no Goliath; as I slung the battery it threw off my balance, and because of the steep incline, I lost my footing and tumbled backward.

My coworker, seeing this unfold, dropped his load and was able to catch me, the damsel in distress. A few minutes passed to allow me to catch my breath and my coworker to stop laughing before I walked up to assess the damage. I crept slowly up the hill, careful with every step, scanning far ahead.

Thankfully the snake had left but with it, a little bit of my pride. The rest of the packing was much slower and more careful.”

“Once I was performing an EM-31 survey in a remote area within Fort Riley, Kansas. The EM-31 consists of two poles that extend about 5 feet ahead and behind you, which are used to map geological variations, among other things. It is carried on the right side of the body about waist high and has a sling that goes over the head and left shoulder, like a messenger bag.

A portion of the survey area was through thigh-high grass. While walking in grass like this it is common to see wildlife, but critters generally see you first and scurry off. Not this time. I was walking along and I came upon a badger.

I can close my eyes and still picture that distinct black and white head. Since this encounter, I have heard these short-legged omnivores can be aggressive – but didn’t know at the time. We became aware of each other at the same time.  He stopped and turned towards me. At that point, I quickly raised the front arm of the EM-31 and came down on his head. Not hard enough to hurt him, but enough to distract him from my feet. He looked straight up, bewildered by this long arm that loomed over his head, then ran off. Luckily, I was carrying that EM-31, which doubled as a badger-pole!”

9 Weeks on the South China Sea

“Before BFW/Marcum, I spent some time working in the oil industry. While there, I worked on seismic acquisition vessels that generally sail 24/7/365. The most remote prospect I surveyed was out near the wreck of the Titanic. It was more than a 24-hour boat ride to the prospect. I’d call that remote. Once on the ship, we wouldn’t leave. My longest stint was 9 weeks on board the Western Neptune in the South China Sea. The closest I got to land during that time was seeing the tops of some hills over the horizon, and you had to be on the bridge to see them.

We saw all kinds of dolphins and flying fish on this trip. It was cool to watch the flying fish elude the dolphins, sometimes flying above the water surface for great distances; they certainly earn their names.

On the engineering-consulting side, I have worked in the middle of nowhere many times, but all within the US. Some of the most remote, have been places like the plains of western Kansas or the tree-covered Ozark hills.”

All Hail the Power of Mother Nature

“Of all the perils I’ve faced in the wild, the weather is always the one that causes the most trouble.

We once piled into the work truck for a storm that came up on us out of nowhere. It got much nastier than any of us would have liked. At a standstill, the windshield wipers couldn’t keep up with the sheets of rain coming down.

At one point, balls of hail clanked on the top of the truck as it rocked back and forth in the wind. Luckily it cleared in about an hour and we were able to get back to work. When the workday wrapped up, we headed back to the hotel. Driving down the county roads that divided the corn fields, we saw several fields, within a mile of our job site, that were mowed down in spiral patterns. A small tornado came through and narrowly missed us and our job site.”

At the End of the Day…Geophysicists Do Important Work

Okay, after hearing a few of Boston’s more harrowing stories, maybe it’s not all smiles and sunshine. Maybe it’s snakes, tornados, and badgers… Oh My!. While there’s plenty of beauty and solitude to Boston’s work, it looks like he earns his keep after all.

Without Boston, we wouldn’t have our understanding of the outdoors to design, build, and innovate. We rely on geophysicists to collect and measure the ground and its relationships to the structures we put on and in that ground.

We wish Boston continued safe travels. We hope any future nope ropes are seen and admired from an equitable distance.