Mine Subsidence: A Problem We Want to Help Solve

We live in coal country. While that industry has dried up substantially compared to what it once was, the lasting effects are here to stay. The truth is, just like the mining of any fossil fuel, you eventually have to face the aftermath.

For Chris Mathews, Geotechnical Engineer/Project Manager, the irony is that what once provided stable footing for many in the form of a booming economy now pulls the rug right out from under us, almost literally. What happens when you dig out the ground beneath your feet? You’re liable to fall in. In engineering terms, we call it “mine subsidence”.

What is Mine Subsidence & Mitigation?

Subsidence is defined as the gradual caving-in or sinking of land. Mine subsidence is similar; the settlement at the ground surface is caused by subterranean coal mines, which can eventually fail, affecting the structures at the surface. Mine mitigation is the specialized process that can stop subsidence before it occurs or limit settlements and damage caused by an ongoing subsidence event. 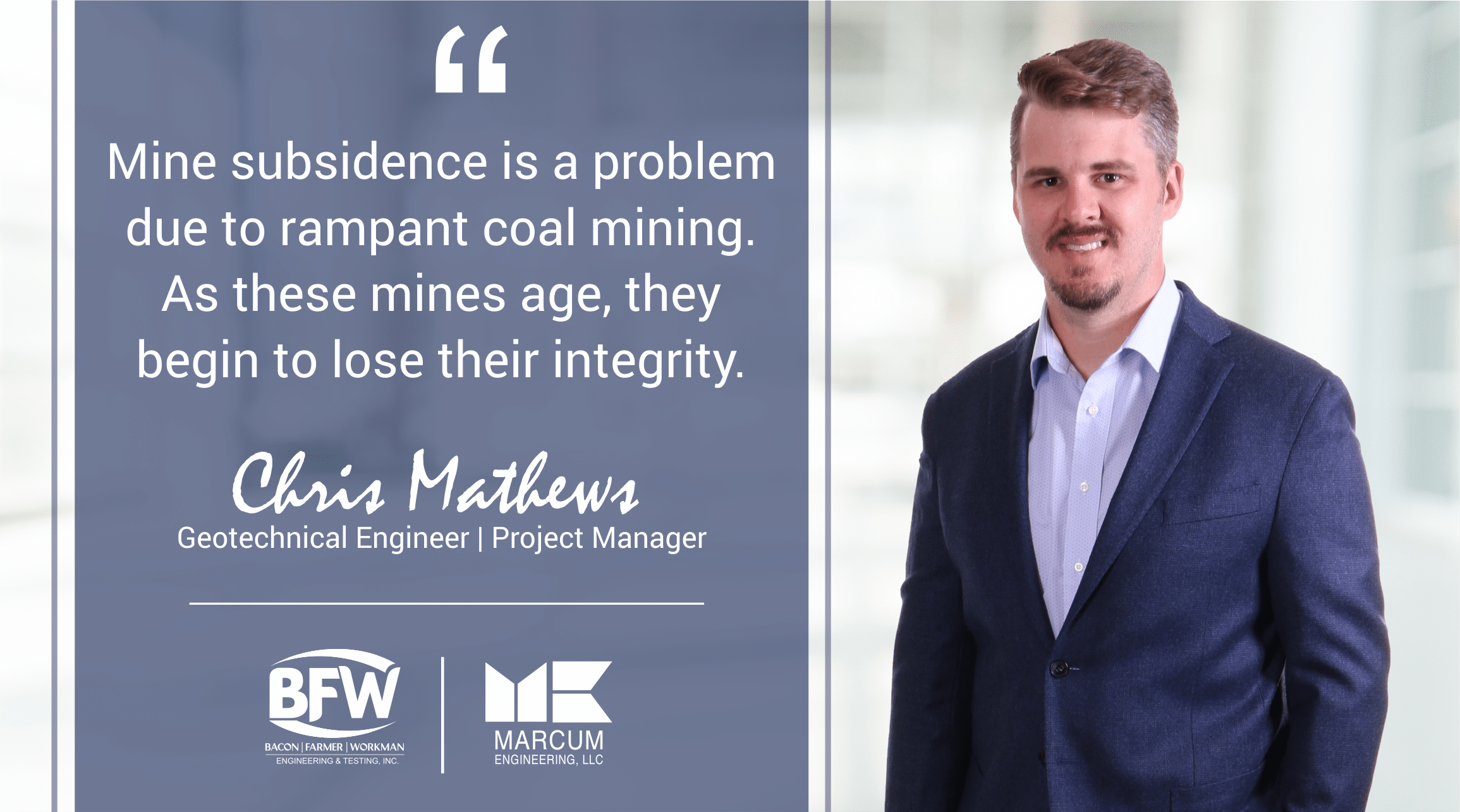 Mine subsidence is a problem due to rampant coal mining. As these mines age, they begin to lose their integrity. As the voids left behind begin to collapse the earth above them fills that void, causing the surface to sink or completely collapse. If you so happen to have innocently built above a failing mine, then you’re in for a surprise. Chris explains the two primary types of mine subsidence.

“Mine subsidence in our region occurs in two forms: pit subsidence or sag subsidence. Pit subsidence is typically observed where the mines are relatively shallow and occurs when the mine experiences a roof failure.  The collapse caused by the failure of the roof eventually works its way upwards where it manifests itself at the surface similar to how people would typically envision a sinkhole.

Many people have no idea what’s below their feet. Chris sees the state of Illinois, as well as Kentucky and its outlying regions, as a figurative minefield, or should we say “mine field”? We asked him for some real-world examples of the subsidence phenomena.

“I have personally witnessed damage to two schools, an ice rink, and two large shopping centers, among countless other structures, that have had subsidence-related issues. One of the schools had to be partially torn down and rebuilt after the mine was mitigated. The ice rink had to shut down and has never been reopened. One of the shopping centers experienced over a foot of settlement and had to have major structural repairs.  Additionally, the owners grouted the development to prevent future subsidence-related damages. I’ve even presented at a national conference on this subject because it’s a widespread issue and it’ll only get worse if we continue to build over the mines without mitigation.”

BFW/Marcum Wants to Be the Solution, One Mine at a Time

We asked Chris to join our team precisely because he had extensive experience in mine mitigation. As an engineering firm, we’re always looking for key people that can bring their own brand of expertise to our team. For Chris, it made a lot of sense to gain his seismic knowledge, which spans much beyond mine subsidence and mitigation. However, it also feels good to throw our hat into the ring when it comes to healing our region from the damage caused by coal mining.

Coal has done our nation a great service. However, it’s important to also focus on reparation. Just as you wouldn’t leave a forest barren of trees after you’ve logged, you shouldn’t leave coal mines to crumble and destroy what is built above them. We replant trees as we log them, so what are we doing about coal mines? 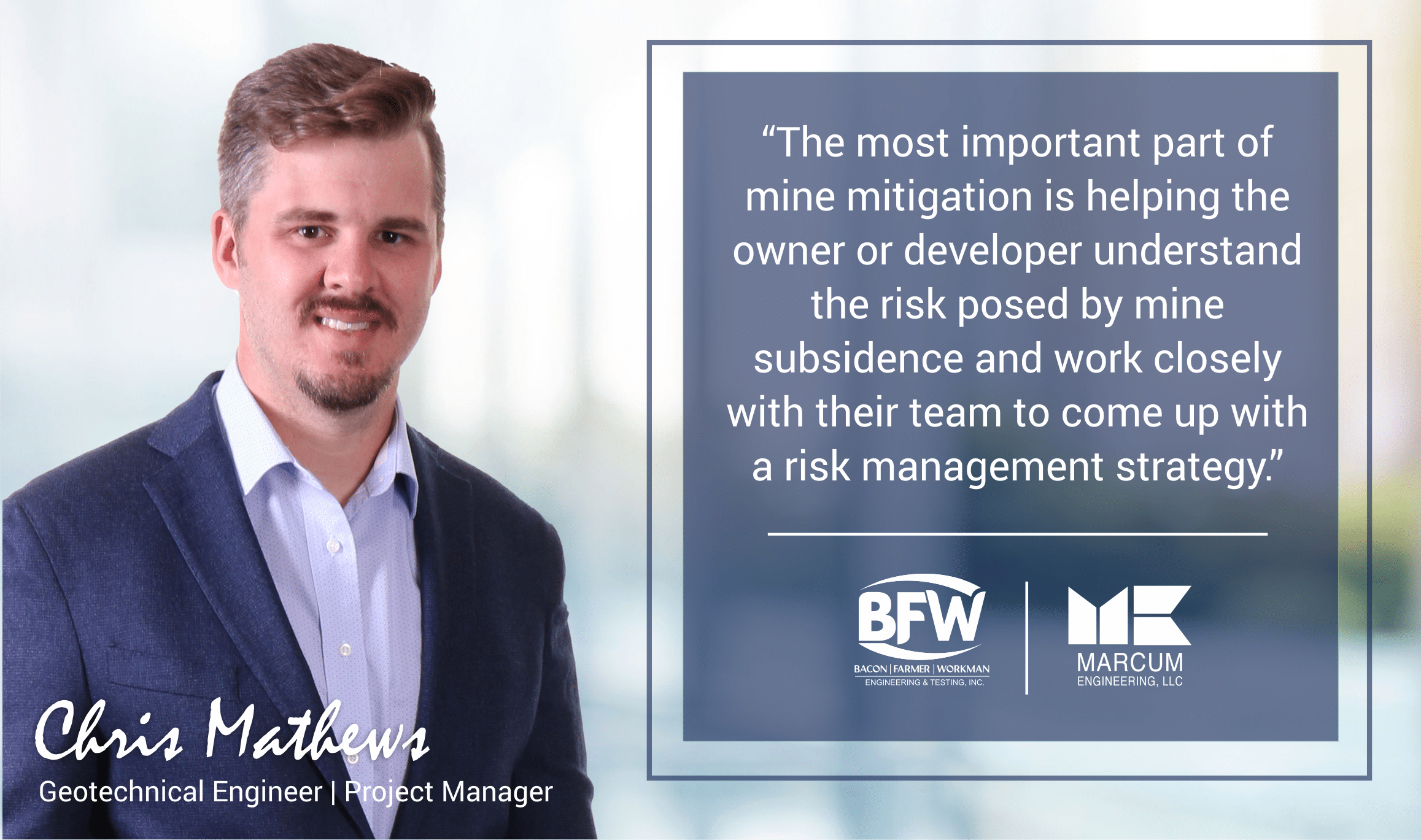 “The most important part of mine mitigation is helping the owner or developer understand the risk posed by mine subsidence and work closely with their team to come up with a risk management strategy.  The most aggressive form of mine mitigation is “saturation” grouting of the mine.  Saturation grouting involves drilling a series of boreholes into a troublesome mine and pumping different grout mixtures into the mine to completely fill the area that could potentially influence the proposed structures or infrastructure. The grout fill the voids, giving a renewed structural integrity at mine level. Other options beyond saturation grouting exist and it is important to understand the local geology and geometry of the mine to develop the appropriate design for a mitigation program.  We have experience using state of the art technology, such as borehole sonar and lidar systems, that allow us to thoroughly explore the conditions in the mine and develop the most appropriate and cost-effective mitigation design.”

A tenet of good engineering is leaving a low footprint. You don’t always want your work to show. However, sometimes engineering means finding proactive solutions to problems that were kicked down the road precisely because they weren’t obvious in the first place. As they say, out of sight, out of mind. Yet, we don’t think you should ignore something just because the damage isn’t obvious.

Our firm, like any good team of engineers, loves the opportunity to stop that can from being kicked further down the road. We’d rather find a permanent solution to make the future brighter. Mine mitigation is a great example of fixing someone else’s past mess to ensure a better future.