Jeff Herod, Fish & Wildlife Biologist, lives by this quote by his hero and world-renowned naturalist David Attenborough. Jeff has invested nearly 3 decades as a biologist, and now he’s ready to be Kentucky’s bat man.

No, we’re not speaking of the caped crusader and master detective found in comic books and movie theatres. While Jeff may be a superhero of sorts, he applies his expertise in a more grounded manner. That’s precisely why Jeff is taking his bat research seriously, and one step at a time.

All Heroes Come from Humble Origins

Like many of the heroes we read from the pages of comic books, Jeff’s brush with fate came in the form of a bat, and that initial meeting never left him.

“My background is fish and wildlife biology. I’ve studied fish and mammals and published much of my work. I developed a real love of bats and interest in their conservation when I first met the Marianna Fruit bat (Fanihi) in 2007. I actually got to hold one – well it sort of climbed on me at a rehab center on Guam. This type of fruit bat is the one we’ve all seen in pictures; they’re the cute ones – that almost look like puppies!

The Marianna Fruit Bat is federally listed as threatened and in need of recovery. I assisted on a few surveys around the island. This species faces threats from the brown tree snake as well as habitat loss. This species is culturally important to the Chamorro people and the island’s ecology.

More recently, in 2020, I assisted a Murray State University Professor, and two graduate students demonstrate mist-netting in Land Between the Lakes. The demonstration was for a local school group to learn about bats. We caught about 9 bats, took measurements, recorded band numbers, and weighed the bats. After a few photos, the bats were released. The demonstration was lots of fun and the kids had a ball! So did I! What an experience!” 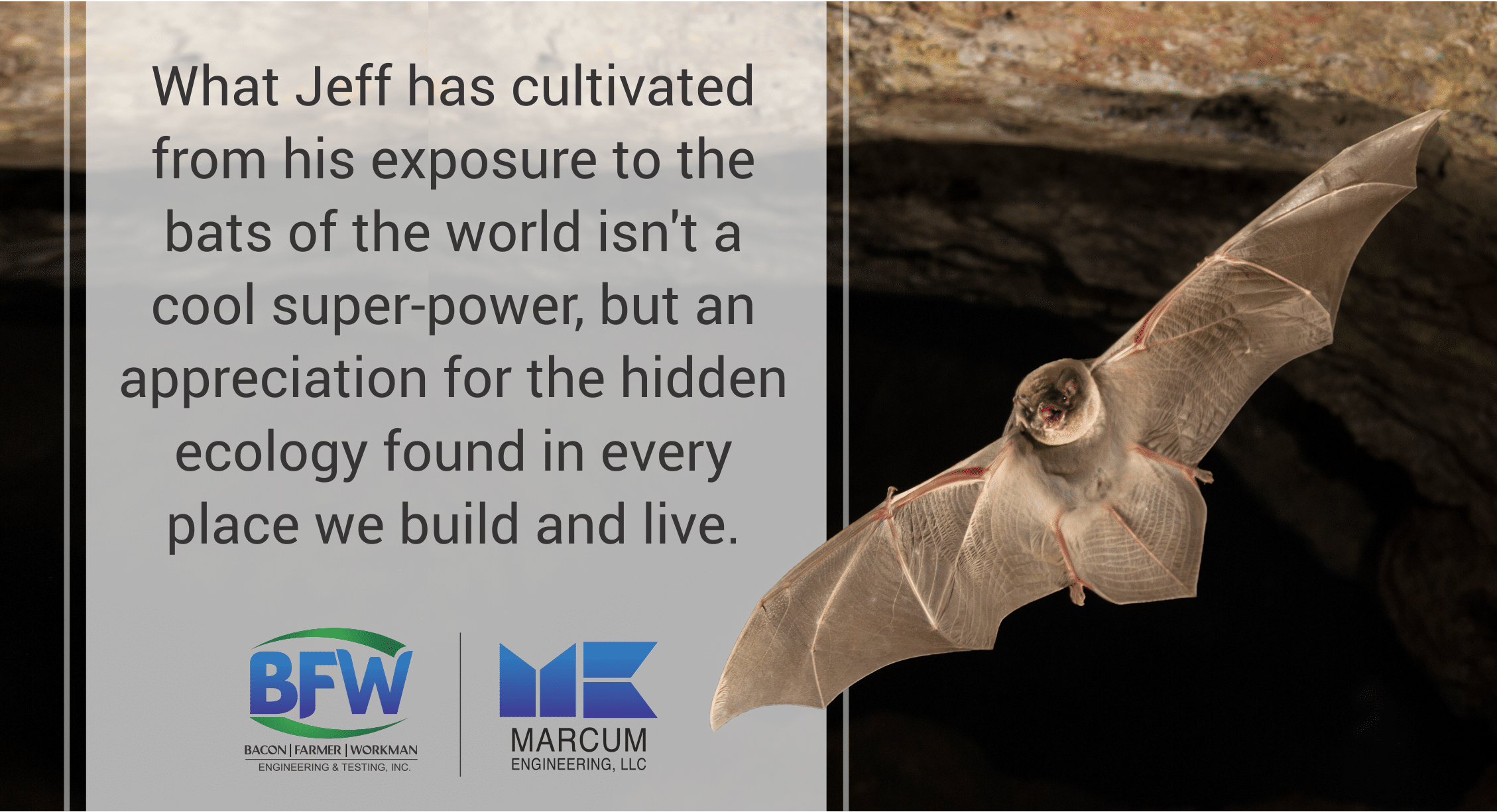 What Jeff has cultivated from his exposure to the bats of the world isn’t a cool super-power, but an appreciation for the hidden ecology found in every place we build and live. Most of all, it’s made Jeff realize that he needs to be the louder voice for these quieter but equally important animals. For Jeff, “out of sight, out of mind” is nonsense; it’s precisely the out of sight that he thinks we need to mind the most.

We Want to Bring Bats into Mind

“First and foremost – I am not an expert in bat biology or ecology. I have spent 25+ years as a biologist. I have a desire to be one of the best bat ecologists in Kentucky, but it will take years of hard work and understudy.  I am late in my career to start in a new field, but I am giving it a good try.

Currently, I am getting to know and network with many authorities on bat ecology. I recently attended a meeting of the Kentucky Bat Working Group. There were presentations on a variety of subjects: bat species identification, habitat use, behavior, and population trends at long-term study areas to understand impacts from White-Nose Syndrome or WNS. I also learned about monitoring bats through acoustic and telemetry techniques (where a device is fixed to the bat and its location can be identified and tracked). The workshop provided training and access to a great network of people concerned with bat biology and conservation.”

Much of Jeff’s work as a biologist makes him hands-on in many ways. After all, a biologist’s job is to try and discover the hidden world of the living things around us, which is surprisingly hard to do. Much of that entails capture and release through the use of tagging and tracking. Once tagged, we can gain great insight into how an animal spends its day or in the case of bats, how it spends its night. However, Jeff has a simpler mission these days as BFW/Marcum’s resident biologist; to ensure we’re bringing bats to mind.

“For the kind of work BFW does, a presence or absence survey for specific species is all that’s needed, so we use what we call acoustic sampling. We simply use sophisticated tools to listen for bat sounds in a given area. We aren’t collecting data on individuals. Yet, our data can still inform and assist the U.S. Fish and Wildlife Service (USFWS) and Kentucky Department of Fish & Wildlife Resources (KYDFWR) with conservation efforts.” 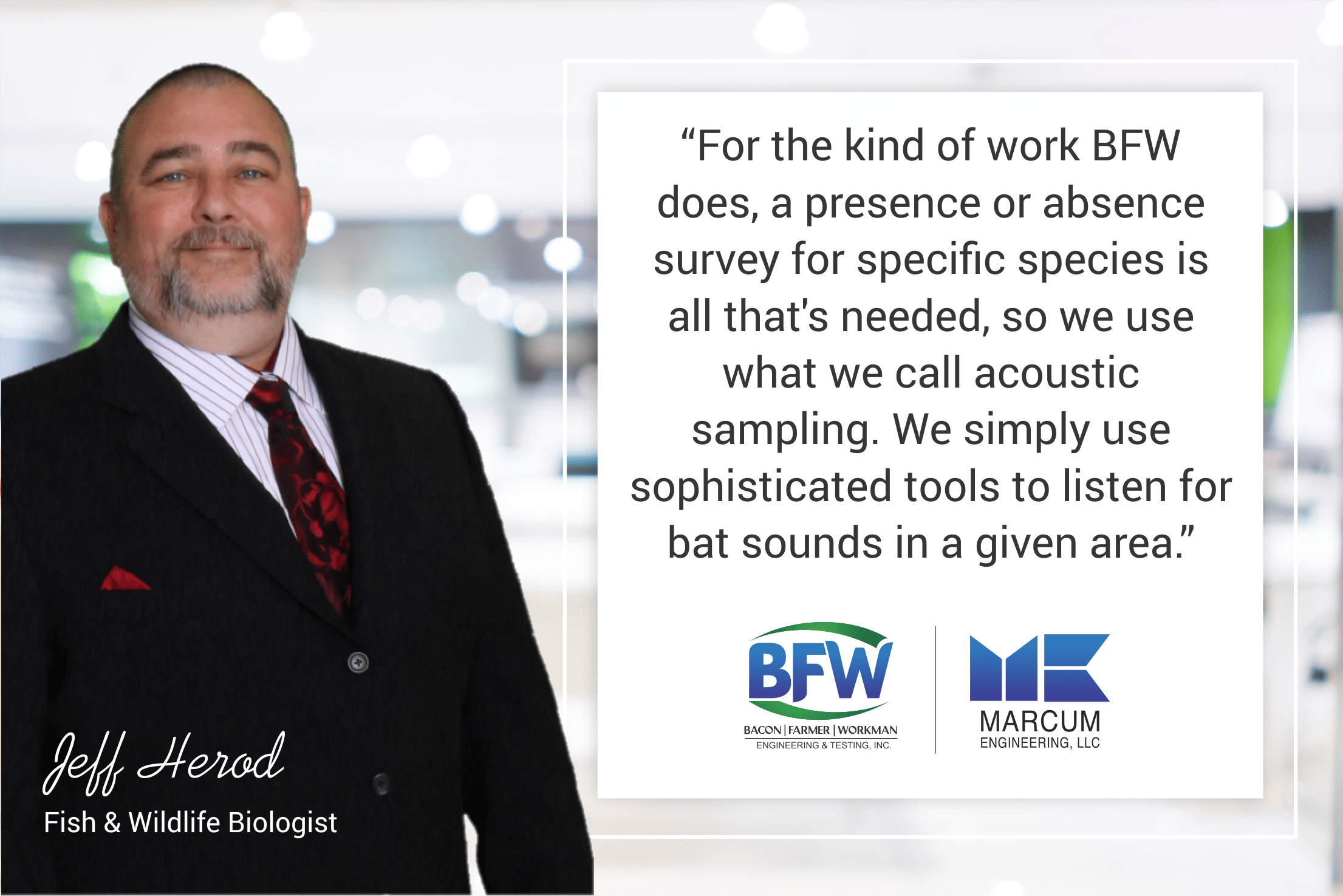 To put it simply; we don’t want to displace threatened or endangered animals, so we’re simply ensuring that none exist where our clients intend to build. Yet, that “yes or no” acoustic data is invaluable to the USFWS and KYDFWR because we’re yet another set of eyes and ears assisting them with understanding regional bat distribution and ecology.

Attending a Class by the Bat Whisperer

Sure, Jeff’s been a biologist for the better part of his life. Yet, he’ll be the first to tell you that he’s always learning, especially when it comes to his renewed interest in bats. Recently, he attended a workshop titled “Acoustic Survey Methods” by renowned bat expert, Janet Tyburec.

“Janet’s course was a two-day workshop on bat acoustic sampling and analysis. We learned the most current hands-on training using multiple types of software to identify bat species found in the southeastern US. We also learned to read and recognize different calls and different frequencies used by different species of bat.

The workshop also covered sampling design, importance of data collection and accuracy of field notes, lessons learned when working in remote areas, and many, many pages of published material on bat acoustics and analysis. ”

Why You Should Care About Bats

When was the last time you’ve seen a bat with your own eyes? Maybe in the summer time you’ll see them sweeping through the night air on a particularly bright moon—their silhouettes like swallows as they stumble through the air. Or maybe when they’re not where they’re supposed to be; clinging to your screen door, or cowering in the corner of your living room—just as confused as you are.

It’s easy for us to discount the animals we rarely see. Yet, those animals can be just as important or more important to our way of life as the bigger, louder animals that are a constant presence in our everyday lives.

“Bats eat insects. They can reduce the negative impacts from insects to humans. For example, bats eat mosquitos that can transmit diseases to humans. Bats also eat insects that harm crops – I lost the source but I know this statistic by heart; in the US alone, bats are estimated to save farmers between $3-4 billion per year in pest control services.

In addition, just like honeybees some bat species are pollinators – think of the aforementioned (and loveable—trust me!) Mariana fruit bat. Due to its decline, certain tree species aren’t reproducing in Guam because those trees rely on the fruit bat to carry pollen around.

The removal of tree habitat is common with site construction. Bats use trees for a variety purposes. Some trees are used for summer roosting, day roosting, parts of flight corridors, resting areas, or a milepost on the way to meal, etc.

There are three federally listed bats that we commonly consult on with USFWS in western Kentucky. They are the gray bat, northern long-eared bat, and the Indiana bat. Gray bats use caves all year long.  During spring and summer they leave to forage but return to the cave they left.  Both the long-eared bat and Indiana bat use caves to overwinter, but during the spring and summer they inhabit forests and wooded areas along streams, rivers, and lakes.

Some species of bats overwinter in leaf litter or use bridges. The Eastern Red bat roosts primarily beneath clusters of leaves during spring, summer and fall. Recently a Chris Farmer (one of the BFW owners) found an Eastern Red bat while walking his dogs and took some photos. Kentucky is also one of several states in the US that has a bat bridge – unfortunately not a BFW designed bridge. There is a great Youtube video about the first bat bridge in Kentucky. Therefore, bats use a variety of habitats.  Most people think of them in your house or in a cave – they do use homes and caves. Yet, when a bat lives in your home, it’s because you’re disrupting its natural environment.”

When you disrupt an environment, you force that environment’s animals to make strange choices as to their habitat and home. Sometimes these choices end up being fine—other times they are too disruptive. The problem is, we can’t always anticipate how our choices effect their choices. We need bats, so we need to ensure they have a safe place to live in peace.”

So, how do you convince clients that they need to care about the ecology of the space they want to build on? Jeff likes to point out the bigger picture.

“If they need to, clients can simply care about the environment for self-serving purposes and that’s okay. First, our communities thrive on diverse spaces and smart land-use. Our landscapes include forested areas to hunt and recreate. Parts of our landscape are agriculture and wetland areas for local food security and flood control. Construction projects must fit into the landscape. There are project sites where bats are present and that is a good thing. 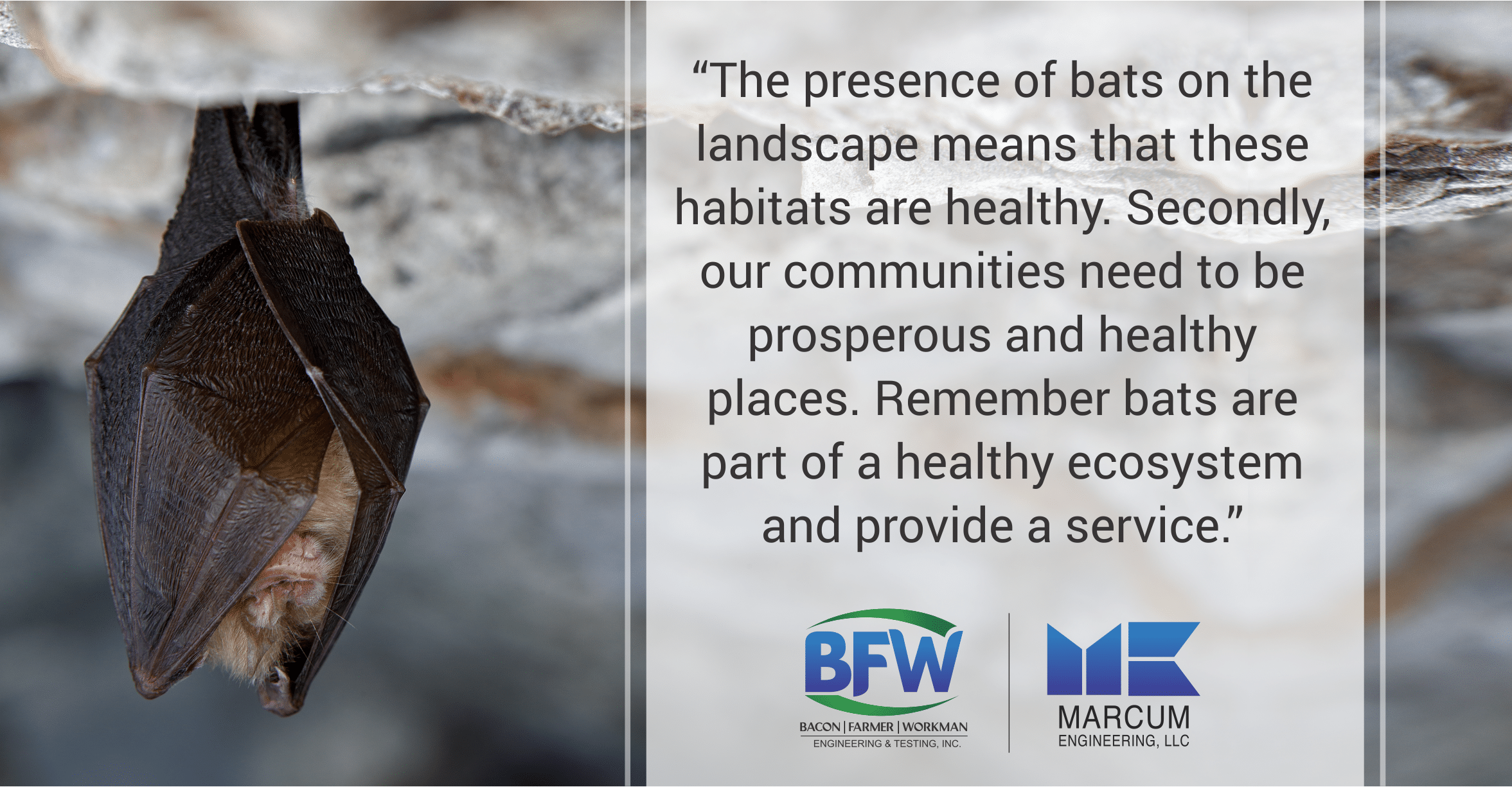 The presence of bats on the landscape means that these habitats are healthy. Secondly, our communities need to be prosperous and healthy places. Remember bats are part of a healthy ecosystem and provide a service. Pest insects damage crops and carry disease. These pest insects are controlled by bats. There is a need to increase bat habitat and connect it across the landscape to increase the number of bats. Think of it as increasing the bat’s service area. The more connected the habitats, the more helpful bats can be. These same areas are great places to go for a hike or sneak off to fish. The goal is to help communities become the best places to live, work, raise families, and enjoy the natural world. Bats are very much a part of that goal.”

Ecosystems Thrive When Everyone is Happy

Jeff’s last point is perhaps his most profound one, and a philosophy BFW/Marcum lives by as an engineering firm. Your community, your ecosystem, your environment, and even the whole world, is not really about diverting resources from here to there. To understand the big picture, you can look at the small one.

A truly healthy system is one in which everyone is happy. That means there is plenty for everyone. It is not selfish, because part of being comfortable is bringing those around you an equal amount of comfort.

Where would you rather live and work; in a high rise that overlooks an arid desert of lifeless dirt, or a building that suits the environment (it can be big, high-tech, and comfortable) and provides you with creature comforts while keeping the creatures around you comfortable as well? A situation where we all win is the future that gives us the most hope. Jeff is just one of the heroes fighting the good fight, so we’re hopeful that we’re making a difference.