Bear with us on this one; talking about our blogging efforts is a lesson in breaking the 4th wall. After all, who blogs about the bloggers? To be completely truthful; we have no choice but to talk about ourselves in this one. However, we’ve found over the past 3 years of blog writing those peeks behind the curtain are what interest our readers the most.

So, with that said, we sat down and asked ourselves how we accomplished 3 years of award-winning engineering blogging. Was it easy? Was it fun? Was it a pain? We’ll let you know.

Blog Writing? For an Engineering Firm?

Lance Allison, Director of Business Development, is relatively new (6 years) to the engineering world.  He spent most of his career as a professional photographer and chamber of commerce CEO before jumping into the world of marketing engineering.

I was in Panama City Beach, when I received a call from Mark Workman about an opportunity at BFW/Marcum. I was going back and forth from Florida to Kentucky every time I could to see my kids, but I was missing some key moments in their childhood. I had come to the conclusion that I needed to be closer to home so when the opportunity with BFW/Marcum came up, I jumped on it.”

The Marketing Committee is Born

Lance describes the inception of our marketing team, which was the first time we truly converged our ideas and started thinking in terms of a narrative. “When we first started this, it was a classic case of the left hand not telling the right hand what it’s doing.” Lance is of course talking about the early days of his work as the Director of Business Development, especially his marketing efforts. “I wasn’t communicating some of the things I was doing with Sam (Samantha Dennee our Director of Proposal Development) and let’s just say the frustration levels were rising. It was leadership’s idea to put us all in a room together and start communicating better.” 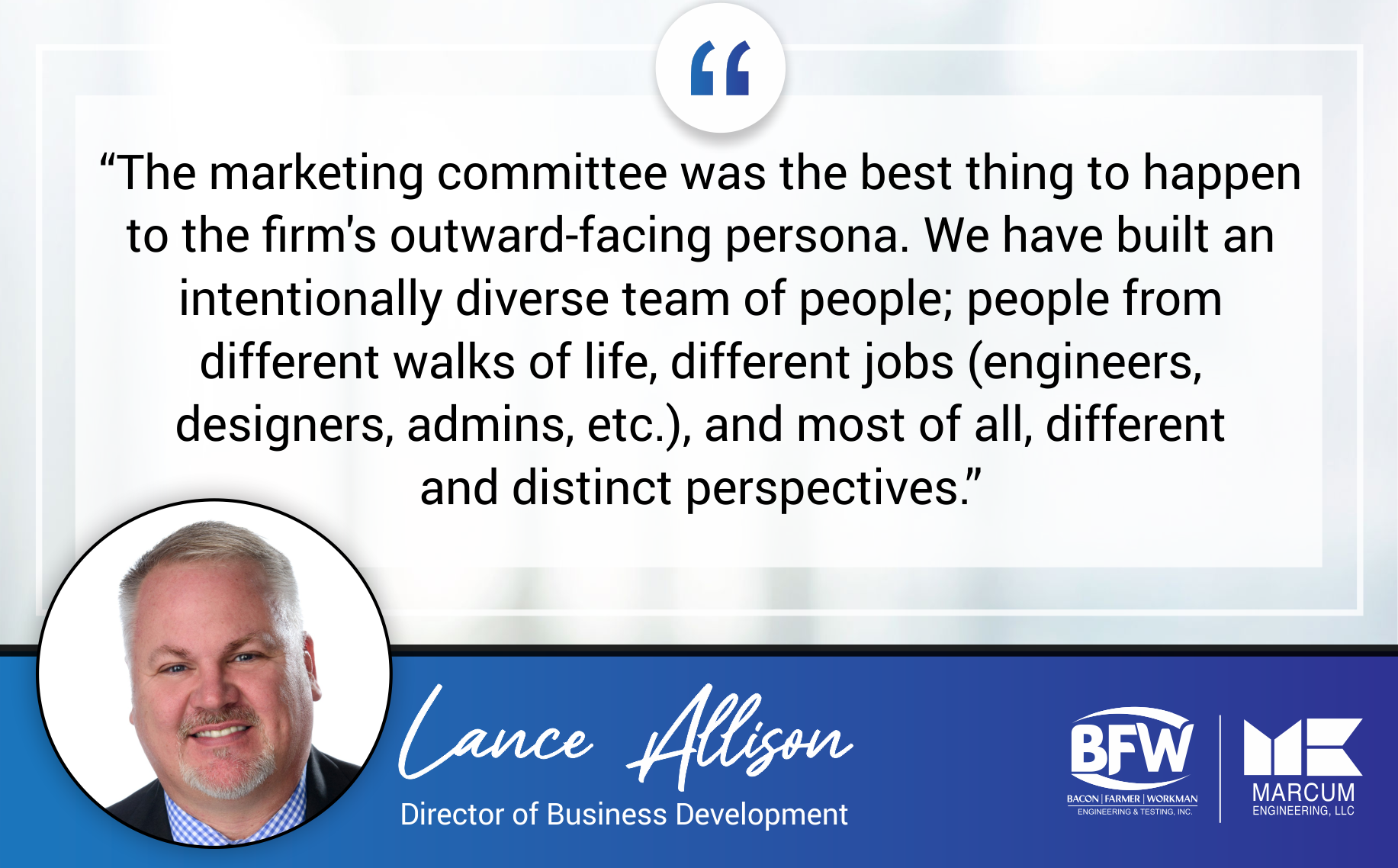 The marketing committee was the best thing to happen to the firm’s outward-facing persona. We have  built an intentionally diverse team of people; people from different walks of life, different jobs (engineers, designers, admins, etc.), and most of all, different and distinct perspectives. Finally, we were all collaborating on telling the story of the company. We just needed to focus our newfound powers on the perfect project.

We Love to Keep Things Simple

Lance explains how he first landed on the idea of starting our broad, long-term blogging strategy. Like most great things, it was equal proportions of luck and intuition.

“I received cold calls all the time from marketing agencies that specialized in architecture, engineering, and construction. We call it AEC and there’s an entire industry based around writing for it. In the early days, we partnered with a digital agency out of California that did okay. However, we couldn’t deny that, while we all had something to say, and our newly founded committee was able to focus our culture and work into a singular vision, it still took a writer to put it all together and polish it up.

We found the writer through the marketing agency we worked with but couldn’t shake the feeling that it was the writing, not the agency, that added the most value. Once the agency contract ended, we did what we always do and evolved.”

That’s where I come in, and this is where the 4th wall really crumbles. My name is Jake Zigler, and I’ve been writing for BFW/Marcum since day 1. Basically, if it’s not in quotation marks, then it’s coming from me. Once my work with the agency ended, Lance and I realized we’d be losing a good thing by ending our relationship.

We’d had a good rapport, and I was finding my way to the heart and soul of BFW/Marcum. When the contract ended and the agency moved on, I asked Lance if I could continue to write for them. It didn’t take long to get that ball rolling. Working with Lance and Mark directly rather than through an agency kept things even more simple; ideas flowed, communication was easier than ever, and we’re still going strong more than 3 years later. – Jake

Answering the Why Question

“Engineers are always asking why,” says Lance. “We wanted what we write to try and answer that question but on a broad number of levels. We wanted to show, not tell, our audience that we are character-driven, client-driven, and community-focused. The thing we realized early on, is we could answer all these questions by simply telling stories; stories about our people, our work, our culture, and our world.”

Let me interrupt for a moment and offer my perspective, which corroborates what Lance is saying. What Lance and his committee learned is something I’ve also discovered as a writer. I’m always drawn to that line from the movie Field of Dreams; if you build it, they will come. The same is true in writing. Good writing creates its own gravity. It sucks you in, and you can’t help but read it and learn a thing or two in the process. Engineering is one of those industries that is infinitely complicated, yet infinitely interesting. There are so many stories to tell; the challenge is letting those stories breathe and not complicating them too much.

When you answer WHY you’re tapping into that childlike curiosity all of us have. When you answer the question compellingly, then you’re getting to the heart of what it is to be human; being inquisitive, carrying that fire, walking a little further into the dark woods, etc. – Jake

We Always Wanted the Accolades, even if It Wasn’t the Point

“At first, I was a fish out of water, so to speak, I wanted to find a nice pond somewhere that held plenty of fish I could commiserate with. That’s where the Society for Marketing Professional Services (SMPS)  came in; it’s an organization comprised of marketers and business developers in the AEC industry. Within a year, I was serving on the board of directors for the SMPS-KY chapter eventually becoming Board President for two terms. I recently rolled off the board but remain engaged.

SMPS holds a prestigious annual competition known as the Marketing Communications Awards. I had my eye on the competition since day one. In the beginning, though, we didn’t do anything that could come close to applying. Once our current campaign with Jake got legs under it, I knew we could at minimum be in the conversation for awards.

With this campaign being only 3 years old, I didn’t tell anyone I was submitting for the blog award. I wanted to dip my toes in the water and use it as a learning experience. I was floored (but at the same time not surprised) when I learned we were a finalist.  I say “I” a lot in my answers but this is not due to my individual efforts. It’s a team effort and everyone has their hands on everything that comes out of here. I may have initiated the idea of content marketing but by no means is our success attributed to just me.”

I had a slightly different impression of the scope and quality of our blogging than Lance. I think we both knew what we’d accomplished was great, but when I looked at the requirements for the Marketing Communications Awards, I knew we had a good chance of taking an award of excellence home. At the time, we were talking about 3+ years of writing unique, intricate content that, often, was a culmination of interviewing 2-3 sources per article. What we’d done transcended blogging and could almost be considered journalism. My part of the work as a writer isn’t easy, but it’s not any harder than the work of the people we speak to, so to do this for over 3 years uninterrupted was a task in and of itself. – Jake

Celebrating Our Award of Excellence

In July, we attended the SMPS Communications Awards show during their annual conference, Amplify A|E|C|. There was certainly a feeling of trepidation but also a feeling of pride in what we’d accomplished, no matter if we won anything or not. Yet, we can’t pretend that we didn’t feel an immense sense of pride when our name was called for the Award of Excellence in Blogging. We accepted our award on stage, shook hands, and reveled for a moment in our accomplishments.

You might be wondering, what did we do afterward? We did what we always do; think about the stories we’re still not done telling. The work keeps flowing, our imaginations still run wild, our culture evolves, the times change, the people grow, the technology advances, and we’ll be here to tell you all about it.