Creating a Legacy of Generosity

We’ve said in the past that our commitment to our community is what drives our business. While it’s true that we have all kinds of clients, we try to keep our focus on how our projects can help our family, friends, and neighbors, even if in small ways.

However, it’s one thing to feel connected to our community members at work. After all, many of our projects pertain to the roads, schools, and public facilities that they use. It’s something else entirely when our team takes that commitment beyond the office.

Recently, Asona McMullen, Proposal Coordinator, was featured on the local news in Lexington, Kentucky. What brought her into the spotlight is her non-profit organization, which she calls “Lex Project Prom.” Asona’s mission is to provide a free shopping experience for under-resourced students attending their senior prom. At least, that’s the tip of the iceberg when it comes to what she’s accomplishing in our community.

We thought we’d sit down and talk in depth with Asona about her organization; how it came about, what inspired her, and how her work as a proposal coordinator has helped her, or vice versa. She was generous enough (she’s known for that quality) to provide us with some answers.

Lex Project Prom Comes from a Legacy of Generosity

“I come from a generous family. Not the kind of generosity that you flaunt, but the quiet kind that is simply there to help and do it with tact and grace. Although I come from generations of single mothers, we were rich on love and kindness.” Asona explains.

“Since I was a child, my grandma, aunt, and mother, as a unit, always explained to me that, as long as I did well in school and was kind to others, they’d take care of anything I’d need. The phrase it takes a village comes to mind because all the adults in my family would come together and share what they had, so it was that much easier for everyone to have something.”

Asona explains the first seed of her project prom idea sprouted back in 2010 when a friend of hers was unable to afford a prom wardrobe, as much as she wanted to attend. Asona brought the matter to her family, specifically her grandmother. She asked for a little help; some money, or something, to help this friend attend prom. Their answer was to pay for everything. Their kindness and generosity created a memory Asona’s friend would remember forever, which sparked a much broader idea in the future.

Flash forward years later. Asona’s aunt had recently passed, which inspired Asona to pay it forward in her honor. The first project prom, although smaller in scale, was formed. While it was not yet an organization, it was the catalyst.

Prom is a Luxury; That’s the Point

“Prom is a luxury; that’s the point,” says Asona. What she’s speaking to is the tendency for generosity to be overly practical. Books? Pencils? Socks, shoes, and school clothes? Those are things that every child should have no matter what.

A stylish prom dress or tuxedo? These are the things that give young people confidence. These things light the fire under you and give you the tools for success.

In February of 2019, Asona and a few of her friends were cleaning closets and organizing to prepare for spring.  They came across their old prom dresses. It was as if the idea for Lex Project Prom was lying in wait. Immediately, they realized what they would do. 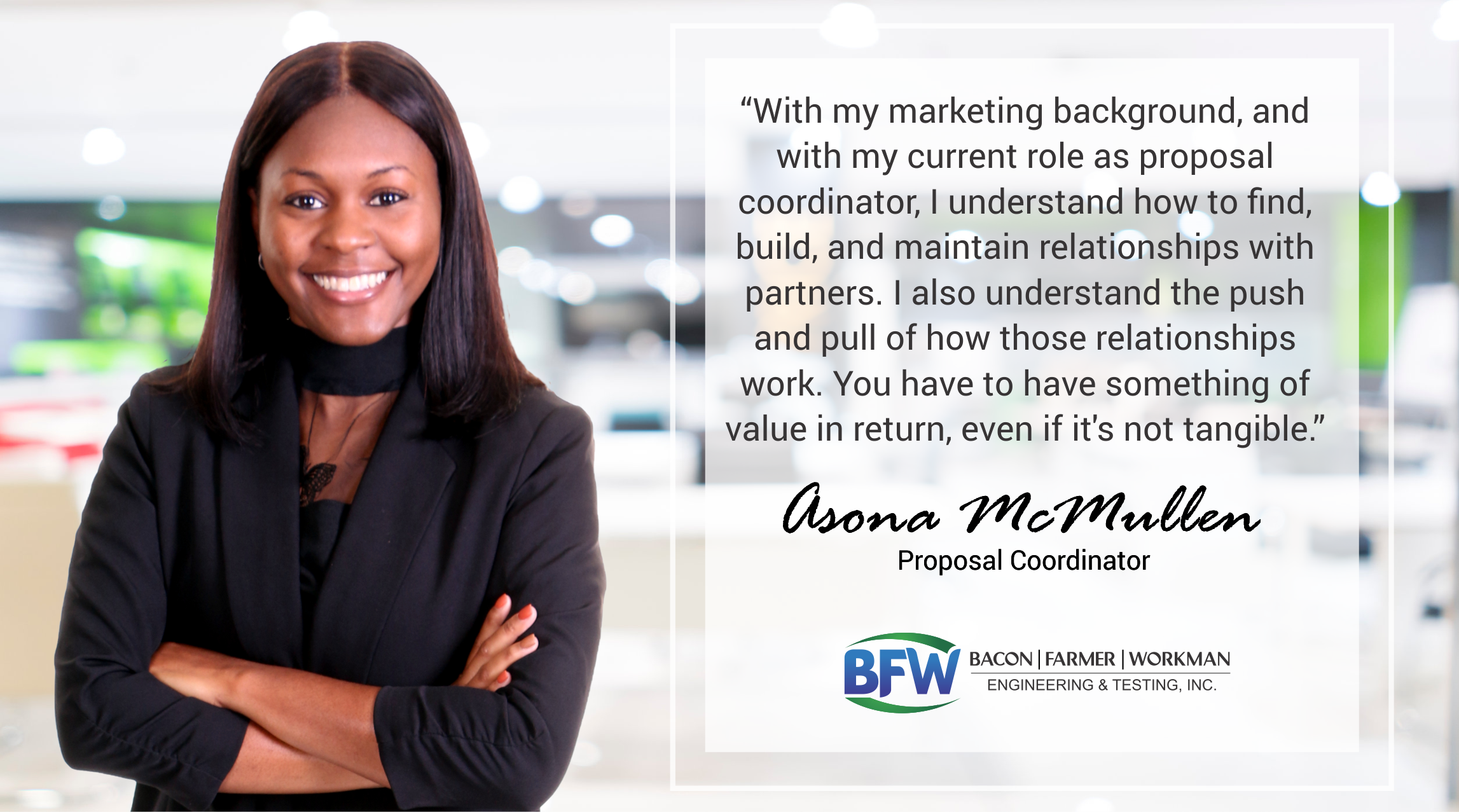 We asked her if her career helped her. “Absolutely,” she answered. “With my marketing background, and with my current role as proposal coordinator, I understand how to find, build, and maintain relationships with partners. I also understand the push and pull of how those relationships work. You can’t always just ask, ask, ask; you have to have something of value in return, even if it’s not tangible.”

Everything You Do Should Serve Something Higher

In engineering as in everything, you should work to serve a higher purpose. That’s where empathy is born. While Asona works full-time as a proposal coordinator, she uses the rest of her time to serve the community, either through Lex Project Prom, feeding the homeless, or helping the under-resourced in other ways.

Is she tired? She answers no; she has very little downtime, but her cup is full, so to speak. When you’re happy, the work you do doesn’t feel like work. We asked her how she thought her work at BFW and her non-profit work might converge. “My non-profit work allows me to see our work at BFW from other perspectives. It lets me think beyond my circumstances. It also lets me answer a few key questions, which I feel help drive our projects in a good direction.”

Those 3 questions? What are the needs of the community? How will the community perceive these changes? How do we make those less fortunate in our community feel comfortable?

We asked Asona if she could share with us what her philosophy in life is, she happily obliged.

“If everyone stepped up to help the next person in line, we would all be better for it. To me, this is the definition of community.”