On February 13, 1984, President Ronald Reagan declared the third Sunday of March to be National Surveyors Week. With over 43,400 surveyors working in the United States today, the discipline is strong as ever. The truth is, not much has changed with surveying. You might be quick to correct us; what about things like drone surveying and LiDAR?

While the tools and technology used for surveying have evolved through the years, the core ideas remain the same. The great thing about geometry, trigonometry, and physics is that they change very little over the years. Not, at least, until another Newton, Einstein, or Bohr come around to shake things up a little.

We have a lot of respect for a discipline that is built on such a strong foundation that it was carried out in much the same way by the Egyptians as it is now. Yes, we’re talking about the ancient civilization that thrived 4,000 years ago. In honor of National Surveyors Week, we thought we’d take the journey with you into the history of surveying. We’ll admit; we only know the highlights. We suspect we’ll be just as surprised as you.

Like most of the pervasive things in human history, money appears to be the primary incentive for the genesis of land surveying. They called surveyors “harpedonaptae”, or rope stretchers because they’d stretch expanses of rope dipped in resin to measure the dimensions of a landowner’s property for taxation. 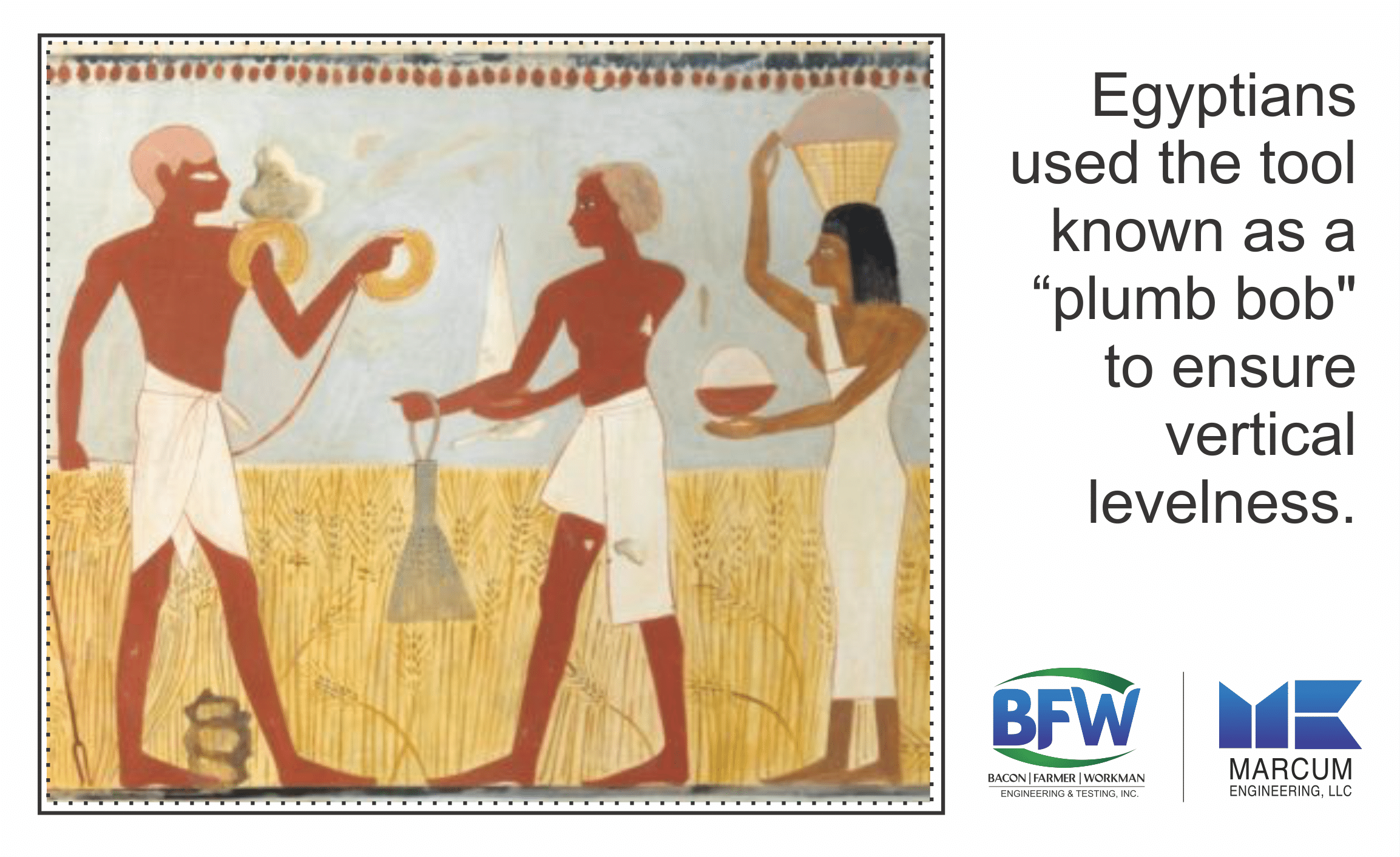 Historians know that Egyptians used the tool known as a “plumb bob” to ensure vertical levelness. Believe it or not, no one can confidently say that this tool wasn’t used before then. Chances are, basic forms of land surveying were done even before the Egyptians but lost to history.

400 B.C.: Mesopotamia and Rome Make Surveying a Part of their Culture

The idea of boundaries became a big deal in ancient human history. So much so that the Romans worshipped Terminus, the god of boundary markers! This all makes sense if you give it a little perspective. As cities became more complex, so too did the social systems needed to keep them organized.

So, as the idea of land ownership, property, and taxes take on a new level of complexity and importance, the job of land surveying became a noble, privileged profession.

221 B.C.: The Quin Dynasty Points Us in a New Direction

Nature is a genuine wonder; case in point, let’s take a look at lodestone. What is it? To put it simply, it’s a naturally occurring magnet. It’s so heavily magnetized that a curious person could pick it up out of the ground and wonder at its ability to attract iron. A curious Chinese engineer would take it a step further.

With that curiosity came the compass. In hindsight, it seems easy; take a piece of naturally-occurring lodestone, carve it into a delicate spoon shape, and suspend it carefully so that it can move freely. What does it do? It gravitates North-South, pointing always at the Earth’s polarized ends. What is now a grade school science experiment was a world-changing invention, and having a scientific certainty of the cardinal directions assisted surveyors tremendously.

As the Greeks mastered geometry, they introduced a tool to surveying that they called the diopter, which allowed them to better measure the geometry of the land. By now, the idea of measuring boundaries becomes a simple part of life. Societies freely embraced the idea of owning and paying taxes on property.

The modern-day concept of property records is not that modern; it was first proposed and established by William the Conqueror, who presided over England between 1035-1087 A.D. William wanted official cataloging of land ownership, as well as who lived there, what type of land could be found there, and the exact boundaries of that land.

This catalog was referred to as the Domesday book (or Doomsday). Don’t worry; the book refers to the Latin phrase Domus Dei, which means “house of God.”

Erasmus Habermehl, possibly inspired by the diopter, invents the theodolite. It’s a perfectly simple instrument, as most timeless engineering tools are; a compass, a lens, and a tripod. 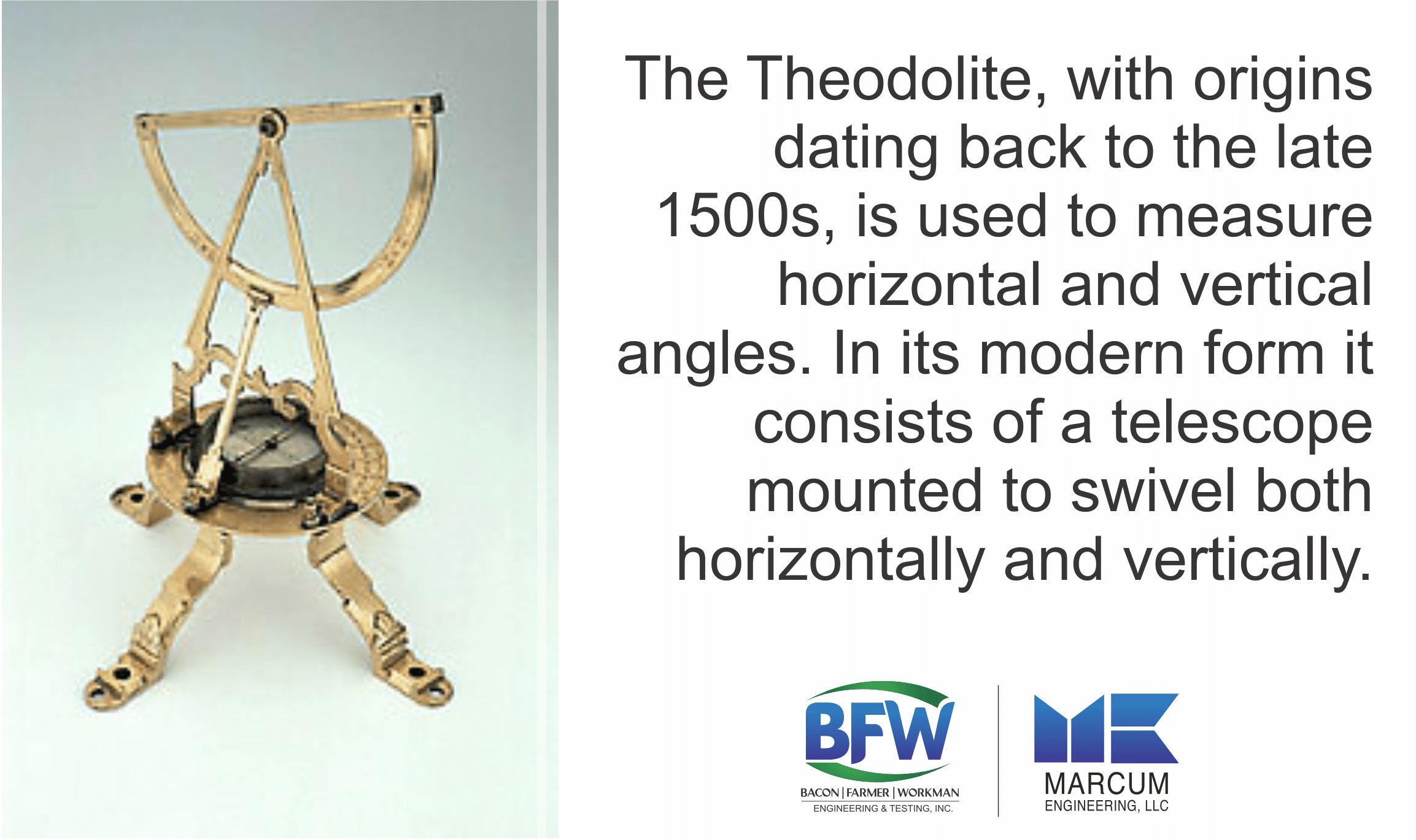 Jonathan Sisson added a scope to the theodolite in 1725.

Through this tool, first invented in the 16th century, we would go on to survey land via triangulation into the 1980s.

We still use theodolites and triangulation for much of our surveying. The primary difference is that these tools have been digitalized for added convenience and accuracy. Yet, it’s important to remember that the math and even the thinking that brought this tool into fruition dates back to Ancient Egypt.

Today, it’s not uncommon to rely on global position systems (GPS), LiDAR, unmanned drones, and geographic information systems (GIS) to either do surveying work or compliment our traditional surveying tools. We rely on both to deliver the best product for our clients.

Don’t Forget Where You Came From

We love to embrace the technologies that make us more efficient. Yet, when we’re using laser dots to track the dimensions of a room, it’s still important to remember where we came from. Let’s not lose sight of the purity in what we do; something that, long ago, was so simple that it could be accomplished with lengths of rope dipped in resin.

If there’s one thing we’d impress upon you for National Surveyors Week, it’s this; when you respect where you came from, it gives you the confidence and appreciation to see clearly where you’re going.