The Engineer’s Guide to Thanksgiving

We’ve reached an impasse, or a truce if you will. We are speaking of course of our tumultuous relationship with Mr. X, the anonymous engineer bent on providing topical life skills with what we think is a definite lack of courtesy.

Both Presidents Washington and Lincoln established the last Thursday to be a day of thanksgiving. Thanksgiving, as we know it today, was first carried out in 1939 thanks to a proclamation by Franklin D. Roosevelt. He designated the holiday to fall on the second to last Thursday of November and made this decision as a means to boost our economy so that it did not shorten the Christmas shopping season.

Historically? There are many different beliefs as to the origins of Thanksgiving. Almost all of them are religious—Thanksgiving is simply a day (or multiple days) out of the year in which you give thanks to those around you. 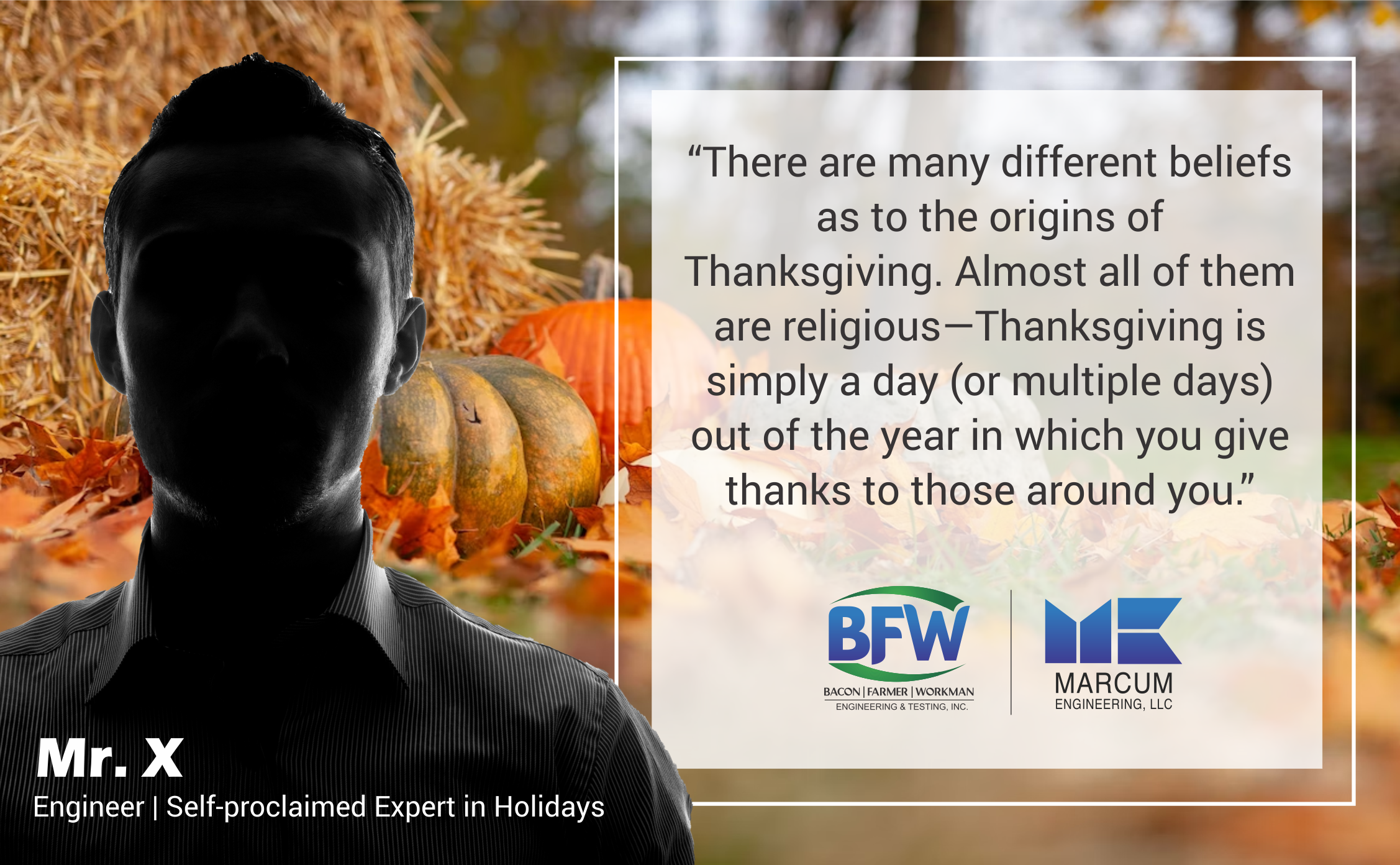 Did we really eat at a giant table in the woods with Native Americans? It’s hard to say, however, European travelers were indeed lousy farmers within the context of American soil and climate. Native Americans showed them how to grow wheat, corn, and other foods that enabled them to survive on the land.

What Did They Really Eat?

The idea of pilgrims sharing a “harvest feast” with Native Americans is largely undocumented. Yet, there are records of at least one such feast; its importance as a cultural and societal milestone is up for debate. However, you might be surprised by what they ate. Here’s a hint; it wasn’t turkey.

Some of the items on a “harvest feast” menu from that period:

I, for one, would like to see a Norman Rockwell rendition of that meal. With that said, as much as I like the idea of hunting the woods for assorted game fowl and growing nearly inedible corn for a nice, thick porridge, I favor the contemporary flavors of Thanksgiving. However, I have a few suggestions for your dishes to make them even better than Gramma’s.

Julia Child famously told the world that the truly best way to cook a turkey is to completely deconstruct it and cook each piece separately. What she was saying, essentially, is that the very idea of roasting a whole bird as big as a turkey is wrong. A turkey has too many types of meat to take a “one size fits all” approach. Perfectly cooked breasts will render the dark meat raw and tough. Cooking down the dark meat so it falls off the bone will ensure that the breasts are so dry you’ll need to take sips from the gravy boat itself to get it down.

Yet, who wants to dissect a turkey when you have all the other dishes to make? What I recommend you do instead is spatchcock your turkey. Yes, I think the name is funny, too. Despite its name, spatchcocking is a simple procedure any butcher worth their salt will do for you—simply remove the spine of the bird so it lies flat. This flattened turkey cooks faster and more evenly, and when presented, will look like that roasted bird you’re so used to.

Don’t season it right before you throw it into the oven. “Dry brine” it, which is to say, salt and season your bird a day before, then stick it in your fridge without any covering. The dry air of your refrigerator will dry the skin, making it insanely crispy once it cooks, and the salt you’ve applied will penetrate the skin and season the entire bird, not just the surface.

Don’t Go Cold Turkey, but Don’t Serve it Hot, Either

As much as you may want to, don’t start carving your turkey right out of the oven, even if your dinner guests are banging their forks and knives on the table like they’re mere moments away from a prison riot.

Instead, allow your bird to rest. Some cooks will even tell you to allow your turkey to rest for almost as long as it cooks. Is that a long time? Could be. Yet, rested, warm turkey is succulent, flavorful, and juicy. Carving a piping hot turkey does two things; it spills out all of its delicious juice onto the cutting board, rather than into your mouth, and piping hot food isn’t going to reveal its complex flavors as well-rested, cooler meat would. We’re not talking cold turkey—we’re talking warm to the touch, but not too hot to handle.

Pulling once again from the culinary master, Julia Child, I recommend that you do not stuff your bird. Cooking stuffing inside your turkey is one of those weird mid-century culinary mistakes like “seasoning” your wood salad bowls by not washing them and making casseroles out of cream of mushroom soup. 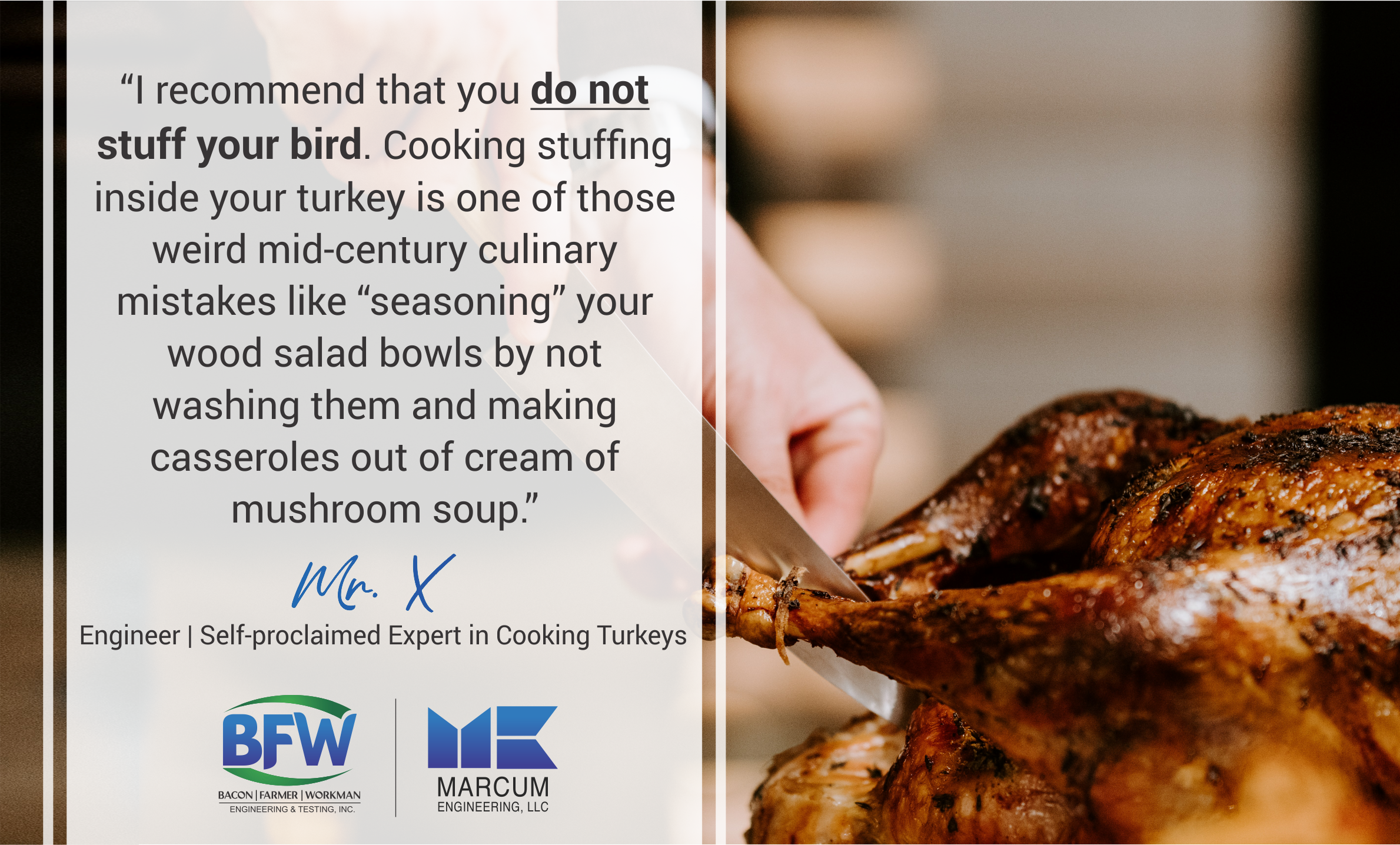 Adding stuffing to your bird increases its cook time dramatically. What you’re doing is overcooking your turkey horribly while making your stuffing soft and mushy, because it’s packed into a moist cavity. Cooking your stuffing in a casserole dish ensures perfect doneness and will give you those crispy bits on the top that everyone loves.

Keep the Weird Stuff for Gravy

One of my favorite parts about preparing a turkey is shoving my fist into the cavity, feeling along its bony ribcage, and grasping its long, wet neck and that little mesh bag of turkey giblets (aka organs.)

No, the butcher isn’t just lazy about throwing that stuff away. They are giving you a little present; pure, unadulterated turkey flavor. Take those pieces and throw them into a stockpot with some carrot, onion, celery, and various herbs and cook it all down overnight. What you’ll be left with is an insanely delicious turkey stock, that you’ll mix with your turkey dripping, (the burnt stuff and grease leftover after roasting) to make a gravy your guests will rave about.

Who am I kidding? A certain ribbed, gelatinous mass of over-sweetened cranberry sauce which comes in the can is delicious. However, it’s insanely easy to make the real stuff, which can be every bit as good. When you make your own cranberry sauce, you’re able to control the sweetness, too. Some people like the bitterness of the cranberries, while others would rather have a glorified cranberry Jell-O. I’m of the latter camp.

Do you want something totally different, yet still in the realm of “cranberry condiment?” I’ve been making this stuff for a few years now. It’s called cranberry relish, and it has a zing to it for sure, but it’s wonderfully addicting and versatile.

There’s a lot of potential for stress on Thanksgiving Day. So, my biggest recommendation is to honor the holiday the way it’s meant to be honored; be thankful. Which means if not everything goes to plan, then don’t sweat it. Your friends and family (or guinea pig) will simply be happy to be sharing the holiday with you.

Did you almost burn the house down? Be thankful it’s still standing, order a pizza, and find the humor in it. As an engineer, I’ve learned you can’t sweat the small stuff. You also must take a moment to simply take a few steps back and admire everything you’ve accomplished. When you take the time to do this, you might be surprised by what you’ve achieved.

Most of all, don’t be afraid to break with tradition. We can still honor the past while trying out something new. It’s true in engineering, cooking, and in how we appreciate a holiday. Make it yours—make it mean something and surround yourself with the people you care about.

Have a Happy Thanksgiving.