Mark Lister, EIT/Project Engineer, was recently tapped to lead our industrial division. He’s had a varied career, the most recent of which is in engineering. Yet, he attributes a good amount of his success at BFW/Marcum to two comparatively unrelated subjects: chickens and football.

He’s quick to ask you not to lose him at this point—before he’s had a chance to explain how these things have helped him as an engineer. Once he explained it to us we fully believed in his theory. Mark believes that leadership is universal at all levels, among all trades, and in every person. It’s just like the gemstone stuck in the mud—it’s there, you just have to dig, and then you have to polish.

What Do Chicken Farms, College Football, and Engineering Have in Common?

We admit that it’s a good hook; putting three things together that have nothing at all in common on a surface level. However, Mark’s career has intersected through all three and he asserts that it’s made him a better engineer.

“My career started as a football coach. I received a kinesiology degree from Tarleton State University in Texas.  I moved to Toledo, Ohio to take a job as a graduate assistant then two years later was promoted to the role of Director of Football Operations and Recruiting Coordinator. I had zero experience with either of these. If anything challenged me to meet a moment head on it was this. After two years in that role, I left to take an assistant coaching position at Cornell University. Two years later I left and became the Defensive Coordinator at the University of Tennessee Martin and then Murray State. Those roles showed me how to be a true leader—I managed around 45 players and handled the logistics of moving them from game to game. Oh yeah, during all of this I was also a chicken farmer.”

“I inherited a poultry farm through my wife’s side of the family. I eventually took the lead on that business, working on the continued maintenance and improvement of the farm. I found that the work was natural, if not all-consuming. This was my first taste of managing a business and through its challenges, I learned the value of hitting the ground running, when to listen and when to speak, and the value of time, working hard, and working smart.”

Mark stuck to the farm, sold it, and built a brand new, state-of-the-art farm in Martin, TN.

“About three years later, with the final child off to college, I enrolled at UT Martin in search of a degree in Engineering.  During my junior year, in lieu of an internship, I invented a new kind of feeding mechanism for chickens. I partnered with the University of Tennessee Research Foundation to file for a patent and was awarded a patent pending.  We also won a grant from the UTRF for $15,000 to procure a 3D Printer for the UT-Martin Engineering Department and used it to build prototypes.  I was surprised by how much I resonated with this side of the business.  After graduating from UT-Martin, I joined BFW/Marcum and began a brand-new chapter in my life. It’s funny; taking those engineering classes showed me that I was already knee-deep into chemical and mechanical engineering on the chicken farm without even knowing it.”

Chickens, College football players, clients, teammates; Mark insists these things are all about value. Where’s the value? What’s it look like? These are two simple questions that allow him to do his job, no matter what that job is.

“So much about working in an engineering firm is about finding the value of every relationship you build. Not just finding it but knowing its valuable in the first place. When I was a college-level football recruiter I had to do that in an even more literal sense. So much of my job was about pounding the pavement and searching for talent. Not just recognizing it but understanding if it fits with what I had in mind.

Most of all, you can’t just tap a kid on the shoulder and say you’re in. You need to be an attractive choice, too. That means being someone they want to work with—being a mentor as well. I’ve taken this philosophy with me to the firm. Whether it’s with clients or with my colleagues, I want to be someone to look up to, someone that earns your respect, and most importantly someone that inspires confidence. 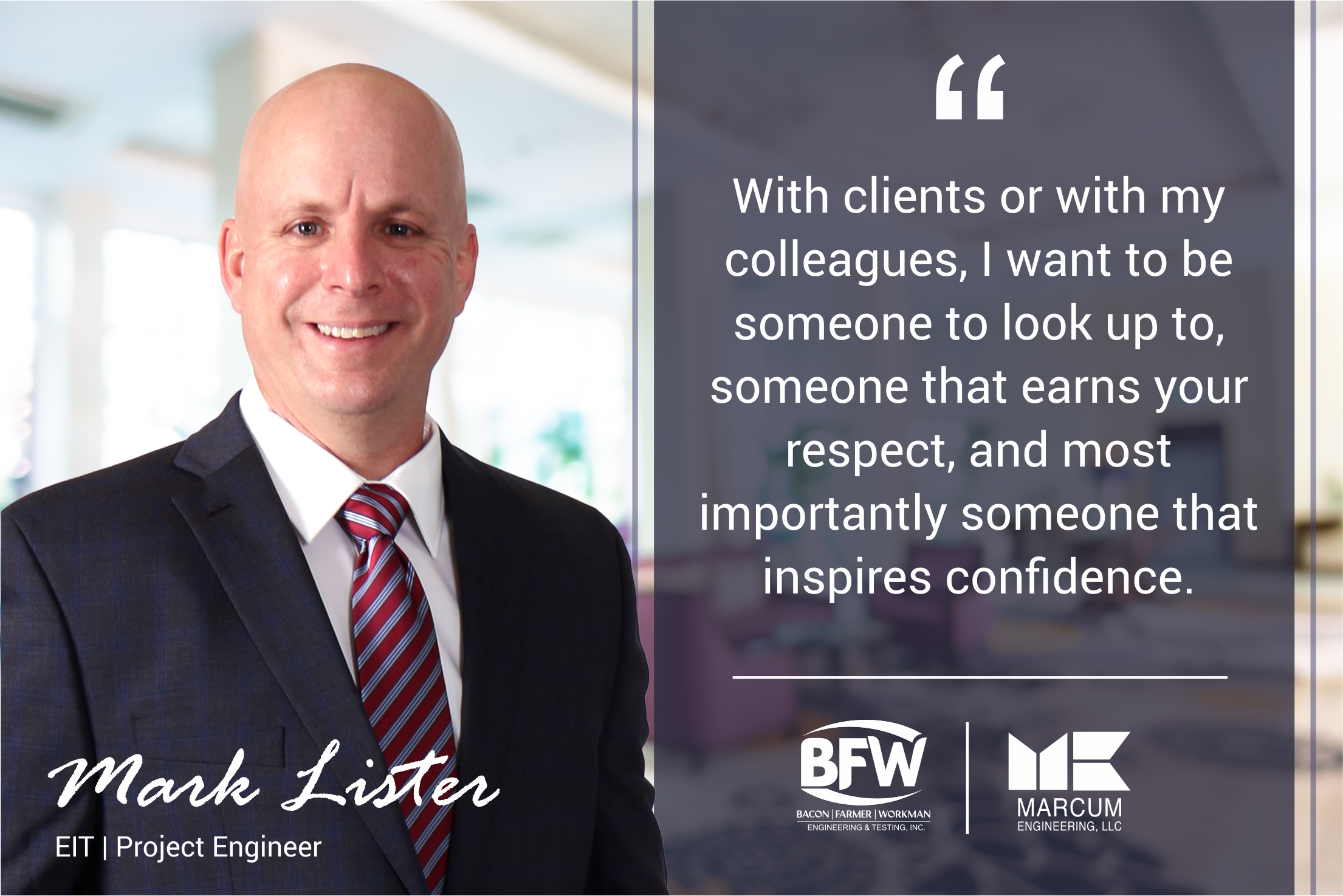 Engineering is all about problem-solving, so I think we all have to support each other when you’re hacking through the weeds trying to figure something out. You want the person next to you to be someone that inspires you. If you do this naturally, then clients will see the homogeny you’ve built and will trust you with their projects.”

“If you asked me to sit down and list the logistical challenges of farming, coaching, and engineering it would be mind-numbing. It would resemble a novel. There’s a reason no one would do that. In all three of these things, there’s an element where you have to build a rigid backbone but still be pliable for when the surprises come. Murphy’s Law is a law that permeates every single situation, no matter what your trade is.

For instance, the first trip I had to coordinate for the University of Toledo was in September 2001 where I needed to plan for my team to travel to Philadelphia for a game against Temple University. I had to coordinate every leg of the journey for over 100 people. All our travel, all our meals, all the logistics of moving people and equipment from one place to another, housing them, feeding them, playing a game, and returning.  Every detail was planned down to the very minute of the trip. It was overwhelming but I broke it down, took it one step at a time, and created a beautiful travel plan.

Then out of the blue, the president wanted my players to stand behind him during an address that he was going to deliver at the University of Toledo when we were supposed to be boarding the plane.  It seemed odd because the school president was supposed to be traveling with us.  But as it turns out, it wasn’t the president of the University of Toledo, it was the actual President of the United States, which at the time was George Bush! The entire itinerary for the first day of the trip had to be thrown out and rescheduled at the last minute so we would all be available for this moment with the President.

You might be asking, then, what day was this in September of 2001. Let me tell you. The game was on September 7th, 2001. Everything went off without a hitch.  We got back late Saturday night.  My first attempt at coordinating travel for a Top 25 football team had worked to perfection.  I felt a little cocky; I felt like I had a real handle on the logistics of traveling at that point.  Then two days later, on Tuesday, September 11th, terrorists flew passenger airplanes into the World Trade center and everything in the world of travel changed.  It was right back to the drawing board.  Yet, your response to adversity is what matters more than the thing happening. This is a fact that lives within any career path you take.”

“You might think, how can you be both flexible and rigid? It’s a bit of a paradox. Think of a tall tree in the forest. It has to support its weight every second of its life against the forces of gravity—it needs to be incredibly strong. At the same time, it needs to be able to bend with the wind, whether it’s a gentle breeze or a storm. Without great strength and the ability to go with the flow, you’ll be doomed to fail. That’s the root (no pun intended) of chicken farming, college football coaching, and engineering. It’s the root of everything in life.”

Mark considers his career path to be a “road less traveled”. It meanders, for sure, but we’re quick to remind him that all roads lead somewhere. Life experience is just that; experience you can take with you, catalogue, and pull out in a surprising moment.

We love working with people like this. The colleagues among us that can sit quietly in a room while plans are laid and problems are inevitably found. Suddenly, from across the room, someone chimes in, “this reminds me of that time…”.